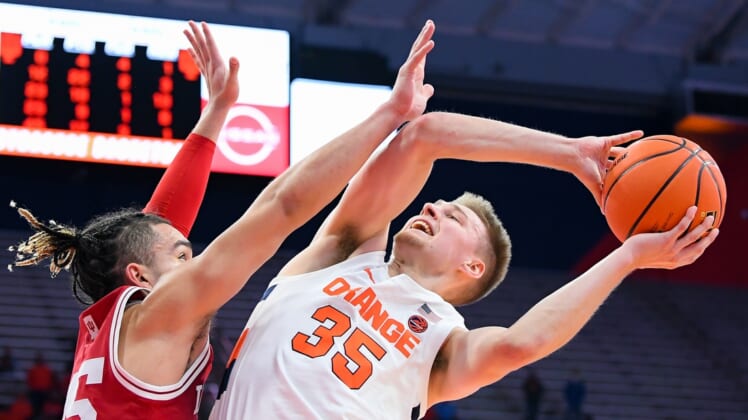 In some ways, Syracuse is viewing its recent 15-day layoff as an opportunity to start the season anew.

Coming off a refreshing victory in their first game back, the Orange (6-5) take aim at visiting Cornell on Wednesday evening. It’s a game that was originally scheduled for Dec. 21, but was postponed due to a rash of positive COVID-19 tests in the Syracuse program.

After scuffling to a 5-5 record in their first 10 games, the Orange returned from a two-week break caused by COVID-19 postponements by notching a 93-62 win over Brown on Monday.

“I think the big thing we were just excited for is that (the layoff) gave us a new opportunity for a new season,” said Girard. “The first 10 games — we won some big games, and we also lost a few that we thought we should’ve probably won.

“The pause was a good opportunity for us to reflect on what we did and get back out there and really be hungry to turn the season around.”

Syracuse forward Jimmy Boeheim, a graduate transfer (and the son of coach Jim Boeheim), spent his first three seasons at Cornell. He is averaging 14.3 points and 5.7 rebounds for the Orange this season.

His old squad has not played since Dec. 8 due to final exams and COVID-19 cancellations. The Big Red (8-2) are off to their best start since 2009-10, thanks to a fast-paced offense that averages 88.1 points, second-best in the nation.

That gaudy mark, however, factors in an ugly 93-60 loss to Virginia Tech in Cornell’s last game. Only one Big Red starter made multiple baskets in that one as the team shot 38.5 percent overall and 30.8 percent from 3-point land.

“We have two classes of guys who have never played in an environment like that, and I think it was hopefully a good learning experience for them to know what it feels like at the top levels,” Cornell coach Brian Earl said. “We want to try to achieve that level one day.”

The Big Red haven’t defeated Syracuse since 1968, having lost 40 straight matchups. They are 0-26 all-time against the Orange in the Carrier Dome.