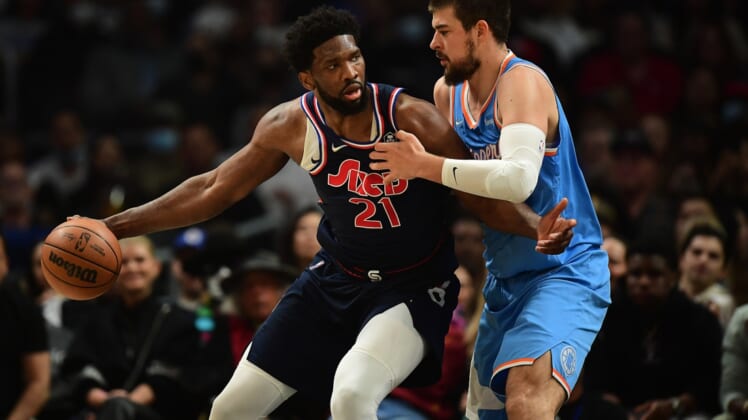 James Harden and Joel Embiid each recorded a double-double and the Philadelphia 76ers bolted out to a 21-7 lead and never looked back Friday night in a 122-97 trouncing of the host Los Angeles Clippers.

Harden finished with game highs of 29 points and 15 rebounds, while Embiid chipped in with 27 points and 10 rebounds. The duo helped the 76ers (46-27) avenge a January home loss to the Clippers (36-39) and prevail for the fifth time in six games overall.

Amir Coffey had a team-high 21 points for the Clippers, who lost their fifth straight.

After Los Angeles scored the game’s first five points, the 76ers took complete control with a 21-2 flurry that featured a 3-pointer and three-point play among eight points by Harden, two dunks among six points by Matisse Thybulle and five points by Embiid.

Philadelphia led 35-19 at period’s end and stretched it to as many as 23 in the second quarter before coasting to a third straight win. The 76ers logged their second victory in a row in Los Angeles after posting a 126-121 decision over the Lakers on Wednesday.

Harden packed his production into just 34 minutes that included an 11-for-11 performance at the free-throw line. He just missed adding a 14th 30-point game to his personal history in 41 career regular-season matchups against the Clippers.

Harden also found time for a game-high seven assists and was 4-for-9 from 3-point range on a night when Philadelphia outscored Los Angeles 45-24 from beyond the arc.

Isaiah Hartenstein (16 points), Terance Mann (12) and Reggie Jackson (11) joined Coffey in double figures for the Clippers, who were outshot 46.7 percent to 40 percent.

Ivica Zubac had a team-high six assists to go with seven rebounds and seven points. Hartenstein was the Clippers’ top rebounder with nine.