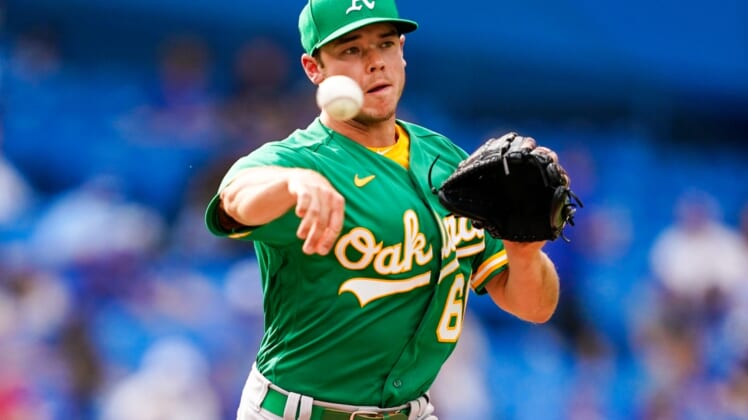 Oakland right-hander Daulton Jefferies will make just his third major league start when the Athletics attempt to avoid a season-opening sweep Sunday afternoon in their interleague series against the host Philadelphia Phillies.

The first two contests followed a similar script, with the Phillies jumping out to a big lead and then holding off an A’s rally.

In the opener, the Phillies went up 5-0 before got Oakland within 6-5, and the A’s climbed within 4-2 on Saturday after the Phillies built a 4-0 lead. Philadelphia won the games 9-5 and 4-2, respectively.

Jefferies, a 26-year-old who is 1-1 with a 5.82 ERA through six big league games, has never faced the Phillies and has never pitched in an interleague contest.

The 37th pick of the first round in 2016, Jefferies has made one previous start in each of his first two big-league seasons when the A’s employed one of the deepest starting staffs in baseball.

He lasted just two innings in his major league debut against the Texas Rangers in September 2020, allowing five runs, but was much better when given a second chance last August, earning his first big league win by going five innings against the Los Angeles Angels.

Jefferies earned a spot in the 2022 rotation after a good-news/bad-news spring during which he struck out 14 in 14 innings. However, he went 0-2 in four appearances (three starts) while allowing 24 hits and amassing a 9.64 ERA.

Jefferies will see a Phillies lineup that already has had four different players hit home runs. Nick Castellanos’ two-run shot in the first inning Saturday gave the hosts the lead for good.

But starting pitching has been the biggest difference in the series, with Kyle Gibson following up on a strong performance by Aaron Nola in the opener with an even better outing Saturday, throwing seven shutout innings and striking out 10.

The A’s have fanned 23 times and drawn just one walk in the two games, which Oakland manager Mark Kotsay acknowledged was an area of concern, while at the same time crediting Nola and Gibson.

“We’ll look at the issue. I don’t feel as if our hitters aren’t competing,” Kotsay said. “Those two starters are good. At the end of the day, tip your cap to two starters who pounded the zone and used all pitches to keep us off-balance.”

Eflin, who turned 28 on Friday, will be making his 103rd career start but first against the A’s.

“I was tearing up just thinking of everything I’ve gone through,” he said. “I’m just really happy with the way I feel and to be able to come out here and pitch and be ready for opening week. I feel like I’m in a good spot.”