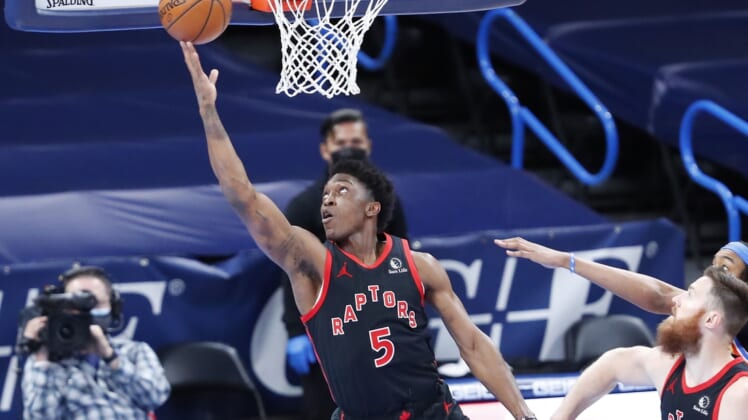 Svi Mykhailiuk scored a season-high 22 points to lift the Oklahoma City Thunder to a 113-103 win over the Toronto Raptors on Wednesday night in Oklahoma City.

Toronto’s loss spoiled a big night from Gary Trent Jr., who led the Raptors with a career-high 31 points. Trent, playing his fourth game with Toronto after being traded from Portland, hit six 3-pointers. His previous career high of 30 came against the Thunder last season.

The Thunder also dominated the glass, winning the rebounding battle 73-39. Oklahoma City hadn’t had more than 62 rebounds in any game this season. The Thunder tied a season high with 19 offensive rebounds and finished with 30 second-chance points, also a season high.

Moses Brown added 20 points and 12 rebounds for Oklahoma City while Isaiah Roby had 17 points and 10 boards.

Both teams were short-handed with the Raptors being without Kyle Lowry and Oklahoma City without Aleksej Pokusevski and Ty Jerome.

Lowry will miss a week to 10 days, Toronto coach Nick Nurse said before the game, with an infection in his right foot. Lowry missed Sunday’s game but played in Monday’s loss to Detroit.

Pokusevski was held out due to the league’s health and safety protocols while Jerome missed the game with a right ankle sprain.

The Thunder used a 12-3 run in the third quarter to take their first lead, 76-75, since the game’s opening minutes.

Trent had five points in the final six seconds of the third quarter. After making the second of two free throws, Trent picked off a Tony Bradley pass then hit a corner 3-pointer at the buzzer to give the Raptors a two-point lead heading into the fourth.

OG Anunoby had 20 points and 11 rebounds for Toronto.