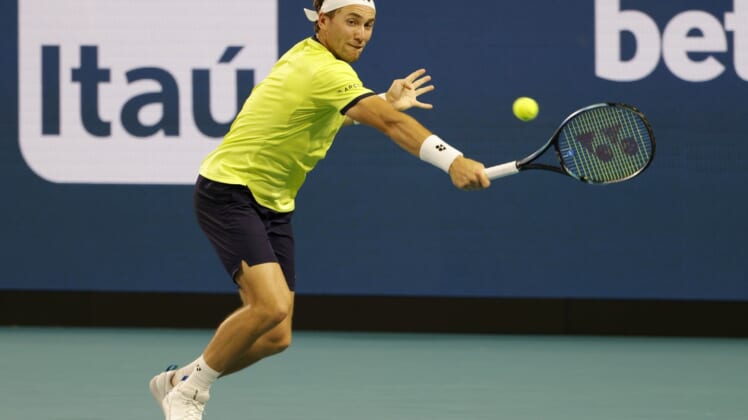 Either Casper Ruud or Francisco Cerundolo will end the week in the biggest match of his career after both advanced Wednesday at the Miami Open.

Ruud, a Norwegian who is seeded sixth, upset second-seeded Alexander Zverev of Germany 6-3, 1-6, 6-3 in the quarterfinals. His semifinal foe will be Cerundolo, an Argentinian who is ranked 103rd in the world.

Cerundolo advanced when ninth-seeded Jan Sinner of Italy was forced to retire from his match because of foot blisters while trailing 4-1 in the opening set.

Ruud has never been to the final of an ATP Masters 1000 event while Cerundolo is making his debut an a tournament of that magnitude, the next level below the Grand Slam events.

Ruud’s only three previous ATP Masters 1000 semifinal appearances all came on clay: in 2020 at Rome and last year in both Monte Carlo and Madrid.

Zverev had won both previous matchups with Ruud, but he couldn’t complete the comeback on Wednesday. Ruud broke serve for a 2-0 lead in the final set, and neither player faced a break point the rest of the way.

“It was great to get that break early on (in the third set) and I was able to keep it all the way out,” Ruud said. “I was serving well. I can thank my serving for the win today.”

Cerundolo, thanks to his abbreviated victory, becomes the lowest-ranked player ever to reach the Miami Open semifinals. No player making his ATP Masters 1000 debut had made a semifinal appearance since Poland’s Jerzy Janowicz did so 10 years ago in Paris.

Cerundolo said of Sinner’s injury, “I didn’t know anything. When I was serving at 3-1, 30-0, I saw him bending down. It was really strange. I didn’t see anything wrong and I hope he is OK, he is a great player.

“It means a lot (to advance). It is everything I have dreamed of.”