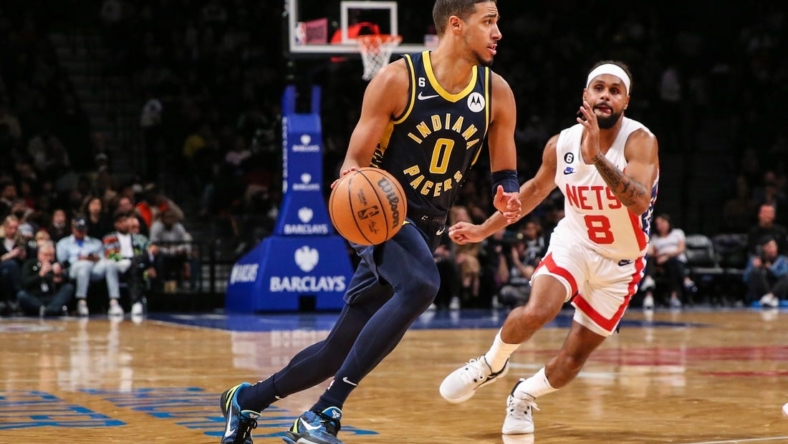 If there is a short list of surprising teams through the first month of this NBA season, the Indiana Pacers are certainly near the top.

Widely considered lottery fodder prior to the season, the Pacers recorded their sixth win in eight games on Wednesday by dispatching the Charlotte Hornets 125-113 on the road.

The Pacers will complete their brief two-game road trip in Houston against the Rockets on Friday before heading back to Indianapolis to start a four-game homestand on Saturday.

As has been the case throughout their run of strong performances, the Pacers were buoyed by youthful guards Tyrese Haliburton (22 points and 11 assists) and Bennedict Mathurin (20 points off the bench) while Myles Turner (20 points, 10 rebounds) and Buddy Hield (19 points) lent support.

It wasn’t supposed to be like this. Haliburton and Hield were acquired last season from the Sacramento Kings, with Hield and Turner components of offseason trade speculation. Mathurin has been a pleasant surprise as arguably the second-best rookie thus far, and almost everything has clicked for the Pacers despite expectations that they would struggle.

“We’ve got some younger guys that are learning what this is all about,” Pacers coach Rick Carlisle said. “We’re such a culture that’s so focused on stats and highlights and points that developing a culture with a young team of doing the right things can be challenging. But we have guys that are willing to listen, and they adjust. And they’re being held accountable by their teammates and the coaching staff.

“We’re making some progress. It’s not going to happen overnight but we’re seeing some good things.”

Having showcased a penchant for competitive play through the opening three periods of games only to routinely collapse down the stretch of the fourth quarter, the Rockets on Wednesday finally showed the mettle and maturity to close out an opponent, doing so on the road in Dallas.

Houston trailed 83-81 with 8:38 remaining before outscoring the Mavericks 20-9 en route to a 101-92 victory. The Rockets responded to a Christian Wood alley-oop dunk with a 9-0 spurt and, surprisingly, finished off the Mavericks on the defensive end by limiting Dallas to 21.4 percent shooting in the final period. The Mavericks missed 16 of 17 3-pointers in the fourth quarter.

The Rockets recorded five of their NBA season-high 19 blocked shots in the fourth and made 8 of 9 free throws in the period. In a game that featured 10 ties and eight lead changes, it was the Rockets who had the answers late, a dramatic reversal for a team that would usually fall short.

“We were desperate,” said Rockets guard Kevin Porter Jr., who had 17 points, 11 rebounds, eight assists and three blocks. “Our record hasn’t reflected how the season has been for us but we’ve been getting better each and every game. We were desperate; we wanted this. We’ve been gone from home so we wanted to get this one and have some momentum to protect our land.”