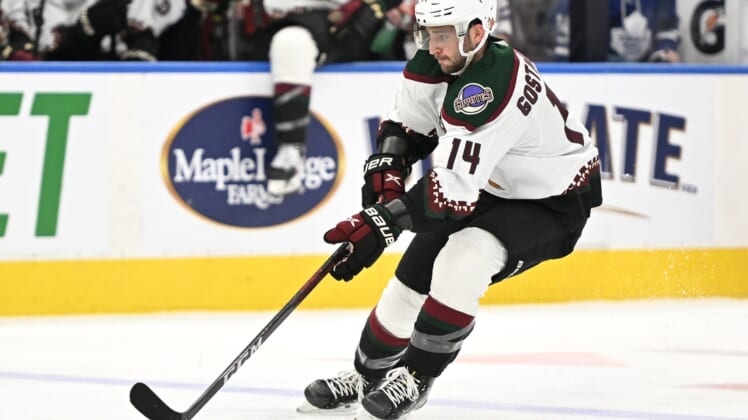 The Arizona Coyotes enter Saturday’s game at Boston proving that the term March Madness doesn’t only apply to college basketball.

The Coyotes, in last place in the Central Division and tied with the expansion Seattle Kraken for fewest points (40) in the Western Conference, are a perfect 4-0 in March. The surprising streak started with a 2-1 home win over the NHL’s best team, the Colorado Avalanche, and continued with high-scoring wins over Ottawa (8-5) and Detroit (9-2) followed by a 5-4 overtime win at Toronto on Thursday.

And they’ll look for their fifth straight win on Saturday on the road against the Bruins.

The 22 goals by the Coyotes over the past three games tied the third-highest total over a three-game span in franchise history. The team twice scored 24 goals over three games in 1985 while it was still located in Winnipeg.

Defenseman Jakob Chychrun scored 2:17 into overtime to give Arizona its latest win against the Maple Leafs. Toronto rallied from a 4-1 deficit in the third period to force overtime with three goals in less than five minutes, including two in the span of 10 seconds by Auston Matthews and William Nylander.

“Guys are just playing good hockey right now,” said Chychrun after his second consecutive multi-goal game. “When everything is going well, it’s easy to not panic and lose focus when you give up a lead. We were pretty calm on the bench when it was a tie game. They definitely got their looks, but we were able to get it to overtime and stick with it and come out with a big win.”

“I liked how we regrouped pretty well,” Arizona coach Andre Tourigny said. “After (Toronto) came back, they had a really strong shift, and I liked the leadership on the bench. I was wondering if we needed a timeout. It’s always a good test to see how your leadership will react on the bench. I like the way how the guys stayed composed and even-keeled.”

“I’m trying to have fun, enjoy it, be in the present,” said Chychrun, who has five goals and 10 points in his past six games. “We have a good group and we’ve been playing good hockey. It’s been fun.”

Entering play Friday, Boston is four points behind Toronto for third place in the Atlantic Division but holds the No. 1 wild-card spot in the Eastern Conference. The Bruins are also on a hot streak, going 8-1-1 over their past 10 games, including a 4-3 victory over the visiting Chicago Blackhawks on Thursday.

David Pastrnak had two goals and an assist and scored the game-winner against the Blackhawks with 17.2 seconds left in the game. The score came on a one-timer in front of the net off a bouncing pass from the right corner by Taylor Hall.

“It was a big bounce-back for us,” Pastrnak said. “Overall, Sway (Jeremy Swayman) made some huge saves there even after they scored (that) kept us in the game till the last minute. That was huge. … Big win overall for us.”

This is the second meeting between the two teams this season. Boston, behind a 30-save performance by Linus Ullmark, won the first one, 2-1, in Glendale, Ariz., on Jan. 28. It was the Boston’s 17th win in a row over Arizona.

The Coyotes — then the Phoenix Coyotes — last won a game in the series on Oct. 9, 2010, when they scored a 5-2 victory over the Bruins in the NHL’s season-opening game in the Czech capital of Prague.