Surprising Blackhawks, Islanders to face off 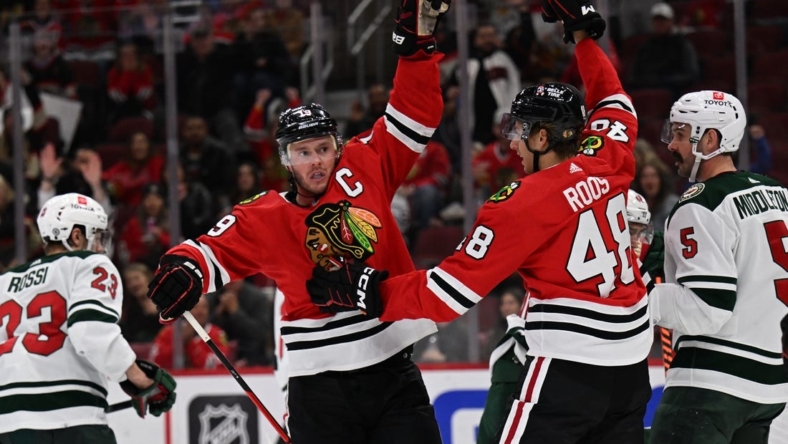 The New York Islanders and Chicago Blackhawks achieved different results over the weekend while playing the two teams that finished last season with the most points in the Western Conference.

But the bottom line was the same: The Islanders and Blackhawks both might be better than expected this season.

Both teams will be looking to extend point streaks Tuesday night, when the Islanders are slated to visit the Blackhawks.

The Islanders are opening a three-game road trip after winning their third straight Saturday night, when New York scored five consecutive goals in a 5-4 comeback win over the Colorado Avalanche. The host Blackhawks earned a point for the second consecutive game Sunday, when they fell to the Minnesota Wild 4-3 in a shootout.

The win over the defending Stanley Cup champion Avalanche completed an impressive week for the Islanders, who blanked the rival New York Rangers 3-0 last Wednesday before they headed south to Carolina and never trailed in a 6-2 win over the Hurricanes on Friday. All three teams made the playoffs last season.

It was a doubly timely winning streak for the Islanders, who entered the game against the Rangers 2-4-0 after only adding defenseman Alexander Romanov to a team that finished in ninth place in the Eastern Conference last season, 16 points out of the last playoff spot.

“I think we’re confident with those twins — I think it only helps,” said defenseman Scott Mayfield, who scored the game-tying goal with 9:21 left Saturday night — 17 seconds before Anthony Beauvillier put the Islanders ahead for good. “I think we know the guys in this room, too. We have confidence in here no matter how it’s going.”

The Blackhawks, whose 68 points last season were the third-fewest in the Western Conference, were expected to contend for the No. 1 overall pick. They traded away their second- and eighth-leading scorers — right winger Alex DeBrincat and center Kirby Dach — to the Ottawa Senators and Montreal Canadiens, respectively. Center Dylan Strome and left winger Dominik Kubalik, who ranked fourth and seventh on Chicago in scoring, also exited as free agents.

But the Blackhawks will enter Tuesday in sole possession of third place in the Central Division, one point ahead of the Avalanche, despite a three-game winless streak filled with plenty of teachable moments for a young team.

The Blackhawks won four straight games before squandering a trio of one-goal leads last Thursday and falling to the Edmonton Oilers, 6-5, on Leon Draisaitl’s goal with 38 seconds left. Chicago had a two-goal third-period lead in a 4-3 overtime loss to the Buffalo Sabres on Friday and also led in the third period Saturday against the Wild, whose 113 points last season ranked behind only the Avalanche in the Western Conference.

“We have to make sure there’s lessons learned early in the season that don’t carry on through the season,” first-year head coach Luke Richardson told reporters Sunday night. “If we get scored on or the other team gets scored on, I think we have to be the ones that dictate what goes on in the game.”