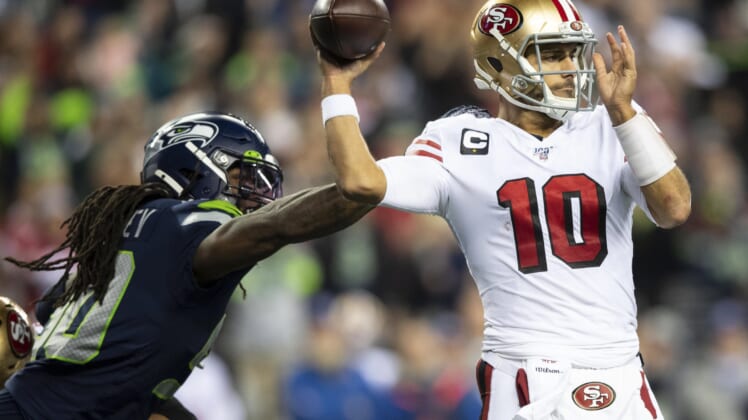 Jadeveon Clowney can be an unstoppable edge rusher when healthy and motivated. After attracting little interest this offseason, the 27-year-old free agent could be extra motivated when he returns to the field. Now, at least one surprising team could look to take advantage.

Clowney went into the offseason demanding a huge contract and a burning desire to play for a contender. While his chances of landing a record-setting deal might be gone, he could still play for one of the NFL’s best teams on one condition.

According to The Philadelphia Inquirer’s Paul Domowitch, the Philadelphia Eagles are interested in signing Clowney to bolster their pass rush. However, the organization isn’t willing to break the bank for him and a move would only come if he brings his asking price down.

Coming off a disappointing season with just three sacks, Clowney wanted $20 million per season under a new deal. Upon hitting the open market, the star edge rusher quickly discovered that NFL teams aren’t as high on him as he is. He has since lowered his original asking price, but there’s still not much interest in the league.

NFL teams aren’t just concerned about his lack of durability. There are fears that the former No. 1 overall pick doesn’t have the work ethic to merit a large contract. Because team facilities are closed indefinitely due to the COVID-19 pandemic, Clowney can’t meet with teams to ease their concerns.

As a result, Clowney could wait until the summer to sign. The start of NFL training camp is in July and teams should be back practicing and conducting physicals, which would give him the chance to prove himself.

After spending the offseason seeing how the NFL feels about him, Clowney could use this as a motivating factor next season. If he is driven and can stay on the field, he would be a fantastic addition for any defense. While it might take Carson Wentz some time to accept Clowney as his teammate, given Clowney’s hit concussed Wentz, it’s a move that Philadelphia would be smart to make.