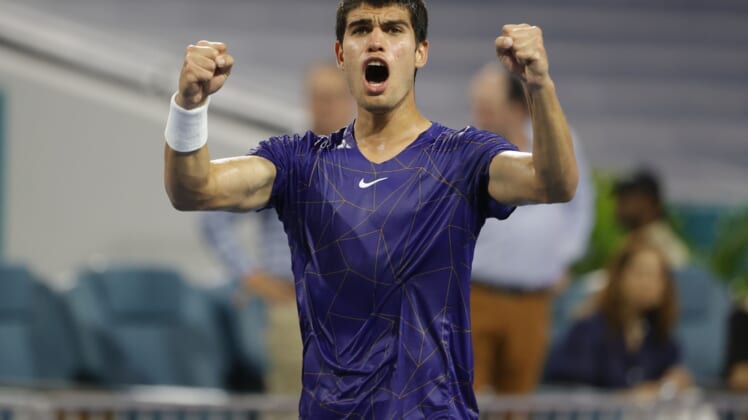 A pair of unexpected finalists will meet for the Miami Open championship after sixth-seeded Casper Ruud of Norway and 14th-seeded Carlos Alcaraz of Spain won their semifinal matches on Friday.

Both Alcaraz and Ruud are through to the final of an ATP Tour Masters 1000 event for the first time. Neither has been to the semifinal of a Grand Slam tournament, so the Sunday showdown will be the biggest career match for both.

Alcaraz will bid to become the youngest-ever Miami Open champ.

“I have a lot of emotions right now,” Alcaraz said postmatch. “It’s something that you dream of when you are a child.

“It’s really good to be in the final here in Miami. I love playing here. The crowd is amazing. I’m going to approach the final like a first round, trying to mask the nerves. I’m going to enjoy it, it’s going to be a great final.”

Alcaraz prevailed in a match that featured no service breaks, with each player saving three break points.

Hurkacz, who had a 13-3 edge in aces, led 5-3 in the first-set tiebreaker before losing the final four points. Alcaraz jumped in front 4-1 in the second-set tiebreaker and wasn’t threatened again.

Alcaraz said, “I couldn’t return his serves, but I knew that the match was going to be long sets like it was, 7-6, 7-6. At the beginning, I saw that I couldn’t return. I thought we were going to play a lot of tiebreaks.”

Ruud won 84 percent of his first-serve points in his comfortable win over Cerundolo, who is ranked 103rd in the world.

Ruud said, “It was not where I imagine myself playing my first Masters 1000 final (on a hard court), but I will take it. …

“It is a great feeling. I am standing here smiling. I have had three tough losses in my previous Masters (1000) semifinals, and I thought today was a good chance to reach my first final. I started a little shaky, but I was able to pull through and raise my level when I really needed to.”