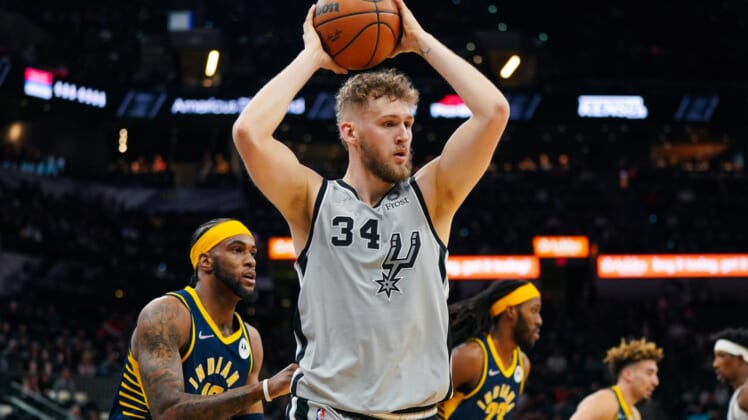 Both the Minnesota Timberwolves and the San Antonio Spurs still have a lot to play for in the final stretch of the NBA season, but the teams’ immediate goals will be a lot different when they square off Monday night in San Antonio.

The Timberwolves are all but guaranteed a spot in the postseason but would like to avoid the play-in tournament. The Spurs have to find something extra to get into the playoff picture.

Monday’s game is the fifth of a season-high seven-game homestand for the Spurs, who have dropped two of the first four games of the stint, including 119-108 to the Indiana Pacers on Saturday in the second game of a back-to-back.

The Spurs played Saturday without starters Dejounte Murray (left calf contusion), Jakob Poeltl (lower back pain) and Keldon Johnson (rest) and performed like a team that was tired and missing its key contributors.

“It was a hard-fought game,” Landale said. “I thought that we battled with what we had. They came out as the aggressors in the first half and, defensively, we just weren’t totally there. You can never fault the fact that we had a great effort tonight, and we’ll always bring that. I think that’s what’s great about this group — we’re young, and we fight every game.”

San Antonio is running out of time to make a run at the postseason and heads into Monday’s game in 12th place in the Western Conference, 1 1/2 games out of 10th and a spot in the play-in tournament with 14 games to play.

Minnesota has been one of the league’s hottest teams in March, when it’s won six of its seven games. The Timberwolves will head to San Antonio after a 113-104 victory at the East-leading Miami Heat on Saturday in the second game of the Wolves’ road back-to-back.

“Even though we were down by 12 (at halftime), it didn’t feel like we were down 12,” Minnesota coach Chris Finch said. “We felt like it was a much closer game and we just had to come out with a good start, with great purpose.”

“We competed well everywhere. Everybody gave us a lift,” Finch said. “Defensively, I thought we were outstanding all game long.”

The Timberwolves’ surge has them in seventh place in the West, but they entered Sunday’s action just 1 1/2 games out of sixth, where they would avoid the play-in tournament.

After Monday’s game, the Wolves will play the Los Angeles Lakers on Wednesday, followed by seven straight games against teams with a winning record.