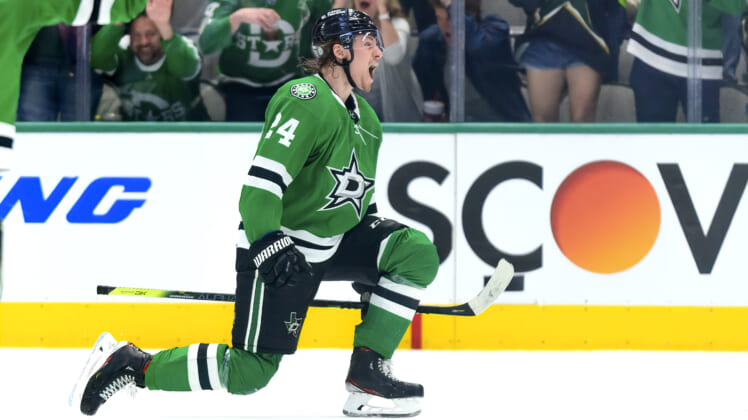 Roope Hintz scored with 4:50 left to lift the host Dallas Stars to a 1-0 win over the Tampa Bay Lightning on Tuesday.

Scott Wedgewood made 25 saves for Dallas in his first shutout since March 7, 2021, when he led the New Jersey Devils to a 1-0 win over the Boston Bruins.

The Stars (42-27-4, 88 points) pulled within a point of the Nashville Predators for the first Western Conference wild-card position. Dallas is 3-1-1 in the past five games.

Andrei Vasilevskiy had 28 saves for the Lightning (44-21-8, 96 points), who missed a chance to clinch a Stanley Cup playoff spot by losing for the fifth time in the past six games (1-3-2).

Hintz scored off a Joe Pavelski feed from behind the net for the game’s only goal.

Wedgewood, playing with his third NHL team this season after beginning the year with the Devils, had to make a few tough saves down the stretch.

Brandon Hagel drove toward the net a full speed, but Wedgwood made the save at 7:28 of the third period.

Vasilevskiy made a difficult save on Luke Glendening at 8:01 to keep the game scoreless.

Wedgewood then stuck out his right pad to turn away Ondrej Palat 36 seconds later.

Wedgewood played three games with the Devils in October before he was placed on waivers and claimed by the Arizona Coyotes, for whom he appeared in 26 games before he was traded on March 20 for a conditional fourth-round draft pick in 2023.