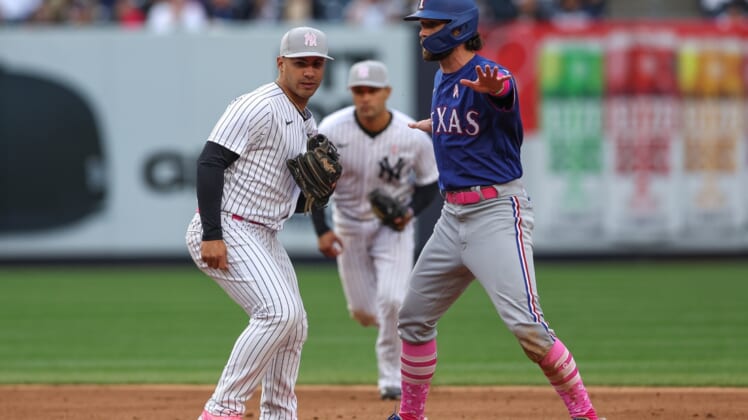 Pinch-hitter Brad Miller hit a tiebreaking, two-run homer in the seventh inning against Michael King to lift the Texas Rangers to a 4-2 victory over the host New York Yankees for a doubleheader split on Sunday.

Miller gave the Rangers a 4-2 lead when he hit King’s 1-0 fastball to center field after Jonah Heim had scored the tying run on a wild pitch to the backstop. King hadn’t given up a run in his past six appearances.

Miller’s third homer of the season marked the first time King allowed a run since giving up a run-scoring double to George Springer in the seventh inning against Toronto on April 11.

King relieved Jordan Montgomery after Heim opened the inning with a double down the left-field line. After walking Kole Calhoun, King struck out Nathaniel Lowe and retired Andy Ibanez on a forceout that moved Heim to third.

Eli White also homered in the sixth as Texas won for the fifth time in six games.

Giancarlo Stanton hit a two-run homer for the Yankees, who won the opener 2-1 on a game-ending homer by Gleyber Torres in the ninth.

New York lost for only the second time in 14 games. The Yankees also had an eight-game home winning streak stopped.

Five relievers followed Otto and combined on four scoreless innings, and Garrett Richards (1-1) was credited with the win.

After Matt Moore loaded the bases, Dennis Santana retired Aaron Judge to end the seventh, Brett Martin worked a perfect eighth, and Joe Barlow tossed a scoreless ninth for his fourth save.