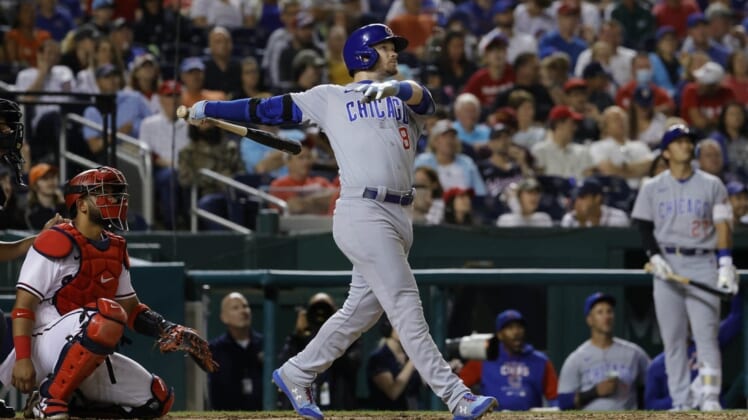 It’s the Chicago Cubs, not the Milwaukee Brewers, who are playing like a postseason contender.

The Cubs can complete a three-game series sweep of the visiting Brewers on Sunday by matching a season high with their sixth straight victory.

After winning 8-7 in Friday’s opener, the Cubs tied the game off Milwaukee’s Devin Williams in the ninth, and won 6-5 via Willson Contreras’ tiebreaking single during their two-run 11th on Saturday.

“Confidence is a strong thing in this game, and these guys have a lot of it right now,” said Chicago manager David Ross, whose club won six consecutive games in July.

Against the Brewers, the Cubs have won four straight and nine of the 15 meetings this season. Milwaukee was last swept in a series at Chicago from Aug. 2-4, 2019.

Milwaukee, which failed to hold a lead four times Saturday, is fighting for a fifth consecutive NL postseason spot but has gone 6-12 since winning seven of eight from July 22-30.

“We have no choice but to bounce back and try to get one (Sunday),” Milwaukee’s Christian Yelich said.

Milwaukee has a chance to stay competitive in this finale behind starter Brandon Woodruff (9-3, 3.53 ERA), who is 6-1 with a 2.50 ERA in his last 12 outings. Yet the right-hander has completed just seven innings once in his 18 starts this season.

Woodruff yielded a pair of solo homers, with three other hits and two walks while striking out eight during Milwaukee’s 5-4, 11-inning win over the Los Angeles Dodgers on Tuesday.

However, Woodruff’s only 2022 start against the Cubs was rough.

During the Brewers’ 9-0 loss at Wrigley Field on April 9, Woodruff matched a career high with seven runs allowed, plus six hits and three walks in 3 2/3 innings.

Chicago All-Star Ian Happ went 2-for-2 vs. Woodruff in that contest. Teammate Nick Madrigal was 0-for-2 against him, but he had three hits in each of the first two games of this series. Madrigal is batting .382 (13-for-34) in his last eight games.

Cubs’ scheduled starter Justin Steele (4-7, 3.43 ERA) has yielded seven runs over 20 1/3 innings while going 0-1 in his last four starts, but only two of those runs were earned. They came during a six-inning home stint against the Nationals on Aug. 10.

Pitching at Washington on Tuesday, the left-hander gave up an unearned run, with five hits, two walks and five strikeouts of Chicago’s 7-5, 11-inning victory.

“I feel like I say this in every one of his starts. … He just keeps getting better, right?” Ross said.

Steele is 1-1 with a strong 2.75 ERA in four starts against the Brewers this season. He allowed a run, two hits, four walks and struck out nine over 6 2/3 innings of the Cubs’ 5-2, 10-inning loss July 4 in his most recent outing vs. Milwaukee.

Yelich is 4-for-9 against Steele this season. Teammate Willy Adames is 1-for-6 vs. Steele in 2022, but he homered Saturday for one of his three hits during this set.