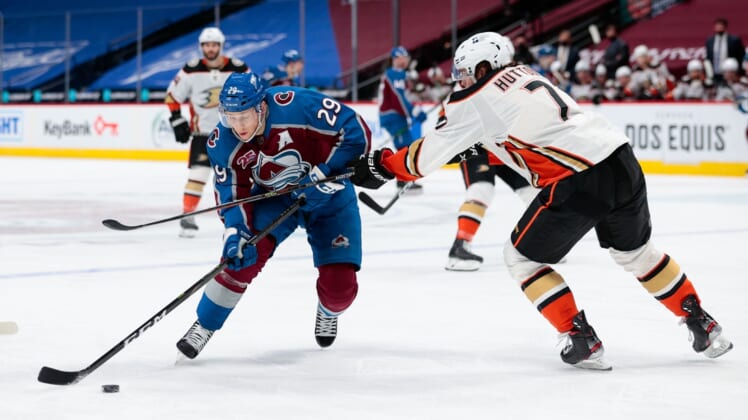 Facing the surging Colorado Avalanche might not be the ideal way for the St. Louis Blues to end their current struggles.

Amid a 12-game point streak and coming off a dominant offensive performance, the Avalanche look to hand the Blues a fifth consecutive defeat in the first of back-to-back meetings on Friday night in Denver.

Vying for the West Division title, Colorado is 10-0-2 — matching the NHL’s longest point streak of the season — since losing 3-2 to Arizona in regulation on March 8.

Joonas Donskoi recorded a first-period hat trick as the Avalanche scored five times over the first 7:31 — and an Avalanche-record span of 3:27 — during Wednesday’s 9-3 home rout of Arizona.

Andre Burakovsky and Gabriel Landeskog each scored twice for the Avs, who have totaled 53 goals over the past 10 games and are also amid a 9-0-1 home stretch.

“It’s been a good season so far,” Landeskog, who has seven goals with 10 assists over the past 10 games, told the NHL’s official website.

“We knew what kind of team we had, and I think we’ve shown it over the last five, six weeks. There’s still steps we can take. For us, it’s important that we keep working, keep trying to achieve first place in the division when the season is over and put ourselves in a good spot for the playoffs.”

St. Louis, meanwhile, is simply trying to remain in playoff position in the West. The Blues are mired in a 2-5-4 stretch and have been outscored 14-4 during an 0-3-1 rut. They managed a point in their most recent outing, a 3-2 home loss to Anaheim on Sunday, but still have not earned a full two points since March 20.

“I definitely didn’t expect us to be in this position,” Blues captain Ryan O’Reilly said. “I know how good we can be, and our personnel, how good it is, but this happens.

“We have to find a way out. The only way we’re going to do it is together.”

These teams haven’t met since splitting the first two games of the season, Jan. 13 and 15 at Colorado. The Avs won the finale of that set 8-0 with Landeskog scoring twice, Burakovsky recording a goal with an assist and Nathan MacKinnon posting a goal with two assists. Philipp Grubauer made 21 saves for the first of his five shutouts this season.

Grubauer has a 1.21 goals-against average with .948 save percentage during his 10-0-1 stretch, though recently acquired backup Jonas Johansson could start one of these two contests with St. Louis.

MacKinnon has 13 assists and 18 points over the past 11 games, but he could face a suspension after throwing a helmet at Arizona’s Conor Garland during a scuffle on Wednesday.

St. Louis’ Jordan Binnington was pulled after allowing half of the eight goals in the January loss at Colorado. He has a 3.05 goals-against average during his current 0-3-1 stretch. Backup Ville Husso is 5-0-1 with a 2.66 as a starter on the road in 2020-21.

O’Reilly has a goal in back-to-back games but failed to score at Colorado in January.

Donskoi scored one of his 15 goals against St. Louis, and has nine with six assists in the past 10 contests.