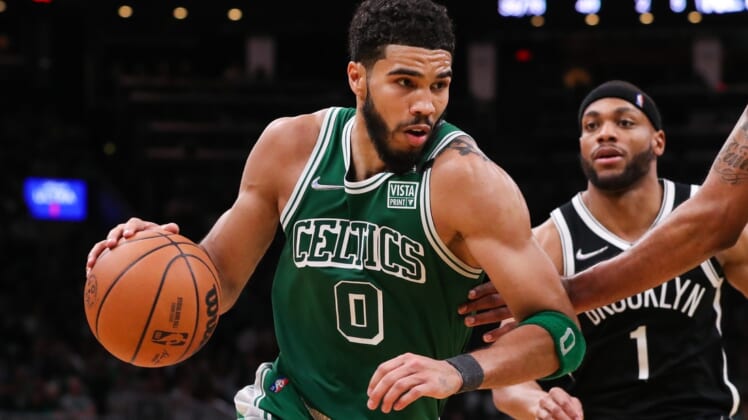 Before Hall of Fame member and 2008 NBA champion Kevin Garnett’s No. 5 is retired to the TD Garden rafters, the Boston Celtics will aim for their sixth consecutive win when they host the Dallas Mavericks Sunday afternoon.

The Celtics continued their winning ways with a 114-103 effort against visiting Detroit on Friday. The Pistons were held without a fourth-quarter field goal until the final 30 seconds.

The Celtics had three 20-point scorers, led by Jayson Tatum’s 31.

After back-and-forth play for most of the night, the hosts blew open what was a two-point game after three quarters and put forth a complete effort down the stretch. Boston held a 22-13 scoring advantage in the final frame.

“With the roll that we’ve been on, sometimes there are games that are going to be a grind. (Detroit) made it a grind,” Marcus Smart said following his 20-point effort. “We got our second wind in the second half and turned up the heat.”

It was often a challenge, but the Celtics won three of their four regular-season meetings with Detroit. The game that the Pistons won last month in Boston had a similar feel as they hung around and edged past the Celtics for a one-point decision.

“You don’t want it easy every night,” Celtics coach Ime Udoka said. “You have to figure out ways to win and score and defend against certain matchups. Every team has a different style. So this one, size-wise and physicality-wise, matches up well with us. I’m happy we could figure out how to get it done, keep our composure, play through and lock in defensively when we needed to.”

Speaking of surges, the 24-year-old Tatum has put together five consecutive 30-point games, matching the longest streak of his career. Friday against Detroit, he also logged eight rebounds, six assists and one steal.

Two nights after a 107-77 loss to New York snapped their five-game win streak, the Mavericks bounced back with a 113-100 win to begin a five-game road trip Friday at Houston. It was their sixth victory in seven games.

The Mavericks led by as many as 29 points in the third quarter.

“I thought the way that we came out after halftime … understanding that this game isn’t over (was) business-like,” coach Jason Kidd said. “They executed the game plan.”

Luka Doncic scored 30 points, Dwight Powell matched his career high with 26 points — including 22 in the first half — and Spencer Dinwiddle had 16 points and seven assists.

“The focus is just to play hard and kind of bounce back from our last performance that wasn’t great,” Powell said. “I’m just trying to play hard every night and take advantage of the opportunities that present themselves.”

Tatum logged a double-double with 32 points and 11 rebounds when the Celtics made the trip to Dallas back on Nov. 6, but Doncic’s game-winning 3-pointer at the buzzer capped his 33-point night and lifted the Mavericks to a 107-104 win.

Doncic has gone for at least 30 points, five rebounds and five assists in each of his past four games against the Celtics.