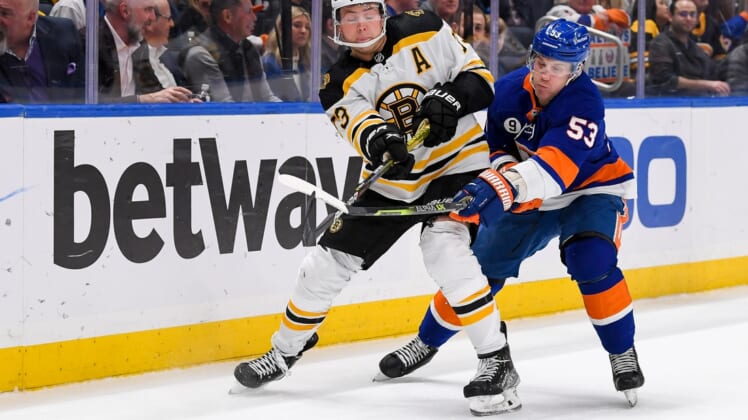 Boston flopped in two previous encounters with the New York Islanders this season, but the Bruins are on a major surge since the last meeting.

They will look to continue their hot streak and avoid a third loss to the Islanders on Saturday afternoon when the teams get together in Boston.

They are meeting in Boston for the first time since New York eked out a 5-4 win in Game 5 of their second-round playoff series on June 7. The Islanders closed out that series with a 6-2 win at Nassau Coliseum and have outscored the Bruins 7-2 in two meetings this season at their new arena in Elmont, N.Y.

The surge has also temporarily moved the Bruins out of the first wild-card spot in the Eastern Conference and one point ahead of the Tampa Bay Lightning, who have played one fewer game. Boston’s 85 points are tied with the Toronto Maple Leafs for second in the Atlantic Division, seven points behind the first-place Florida Panthers.

Boston has played the past four games without captain Patrice Bergeron (elbow) and he could return Saturday. On Thursday, the Bruins survived his absence by earning a 3-2 win over Tampa Bay when David Pastrnak notched a hat trick and scored the game-winner with 4:10 left, giving him eight goals over his past 11 contests.

“We miss Bergy (Bergeron) and can’t wait to have him back,” Pastrnak said. “Obviously, this is a big win. Overall, any games against your division teams are big. We’ve been chasing those three teams for a while.”

Pastrnak is not the only surging Bruin of late. Erik Haula set up all three goals and has five assists in his past two games, and goalie Jeremy Swayman made 22 saves and is 11-2-1 in his past 14 games.

The Islanders, meanwhile, are poised to spend the last month spoiling things for opponents and host Tampa Bay on Sunday afternoon. New York has 15 games remaining against teams currently in playoff contention and is 7-1-1 in its past nine games.

New York’s last two wins are against teams out of the race, as it followed up Tuesday’s 3-0 home win against the Ottawa Senators with a 5-2 win over the visiting Detroit Red Wings on Thursday.

Those wins occurred after the Islanders declined to shed any veterans at Monday’s trade deadline.

On Thursday, Brock Nelson scored twice, giving him 10 goals in his past 11 games, a stretch where the Islanders are 8-2-1. Despite their best stretch of the season, the Islanders entered Friday 15 points behind the Washington Capitals for the second wild-card spot although their 18 remaining games are three more than Washington.

Anthony Beauvillier scored nine seconds in against Detroit and captain Anders Lee collected three assists, giving him 10 goals and 16 points over his past 10 contests.

I think we’ve committed to one another in a sense of playing the right way and finishing this thing out strong,” Lee said. “And we’re in a position where it’s, let’s just go for it and see what happens.”

The Islanders are 7-2-1 in the past 10 regular-season meetings.