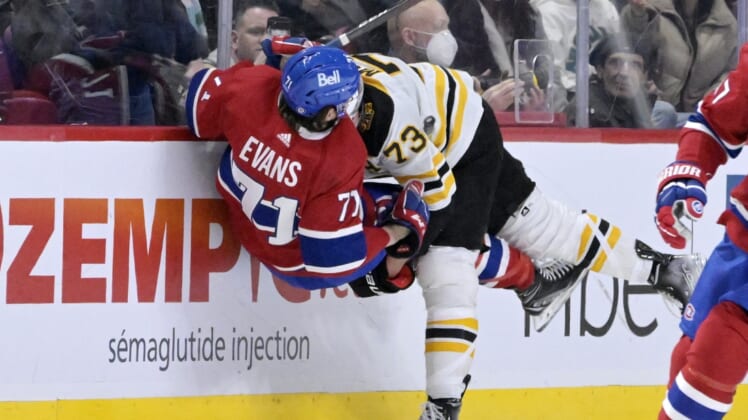 The Boston Bruins begin a five-game homestand Thursday night when they host the Tampa Bay Lightning in a key Atlantic Division clash.

The two teams, who are separated by a single point, are battling with the Toronto Maple Leafs behind the front-running Florida Panthers. Boston gained ground with Monday’s 3-2 overtime win at Montreal.

Brad Marchand lifted the Bruins to their fifth win in six games after scoring his second goal of the contest at the 34-second mark of overtime.

Erik Haula set up Marchand, who won the game after defenseman Connor Clifton scored the tying goal with 2:59 remaining in the third period.

“We hadn’t seen them in a while, they made a coaching change (with Martin St. Louis taking over in February), we talked about some of the adjustments,” Bruins coach Bruce Cassidy said. “They seemed to be playing with maybe a little more attack energy, getting their D involved. For us, we try not to change our game no matter what.”

Jeremy Swayman made 26 saves to earn his ninth victory in his last 10 starts.

Boston could see a few new faces crack the lineup on Thursday after acquiring defensemen Hampus Lindholm from Anaheim and Josh Brown from Ottawa this week.

Lindholm, who signed an eight-year contract extension after being traded to the Bruins, skated with Charlie McAvoy during Wednesday’s practice. Lindholm looks set to play Thursday.

“All of (the defensemen) are going well,” Cassidy said. “One of them is going to be unhappy tomorrow, but the message is, ‘Hey, we’re all in it together and when it’s your turn, be ready to go.’ … It’s a really good problem to have. … I think everyone has to play to their strength.”

In addition, Jake DeBrusk agreed to a two-year extension and then remained with the Bruins following the NHL trade deadline.

“That will probably make a few of the guys more comfortable, at ease,” Cassidy said of passing Monday’s deadline. “I think, in general, we feel we’re a good hockey club and we’re trying not to subtract from it.”

Captain Patrice Bergeron was labeled as “probable” by Cassidy, though he will have a doctor’s appointment in the morning before the game. He has missed three games after having an infection in his elbow.

The Lightning have scored two or fewer goals in five of their last six games, including Tuesday’s 3-2 setback in Carolina. Tampa Bay has lost two in a row and five of its last seven contests.

Nicholas Paul scored in his Tampa Bay debut. He was acquired Sunday in a trade that sent Mathieu Joseph to Ottawa.

“The second period I just turned the brain off and played hockey,” Paul said. “I think in the first I was thinking a little too much, but as the game went on, I just started feeling it out and getting more chemistry with the guys. (Ross) Colton makes a great play over, a little tip goes in. Good first start. I definitely can build off that.”

Two of Carolina’s goals came on power-play transitions. Alex Killorn cut the Lightning deficit to one in the final minute of the third period.

“We gave them a couple goals and then they got momentum off that,” Lightning coach Jon Cooper said. “We probably got away from the game plan. We started taking pucks backwards where you really can’t do that against (the Hurricanes) and we paid for it.”