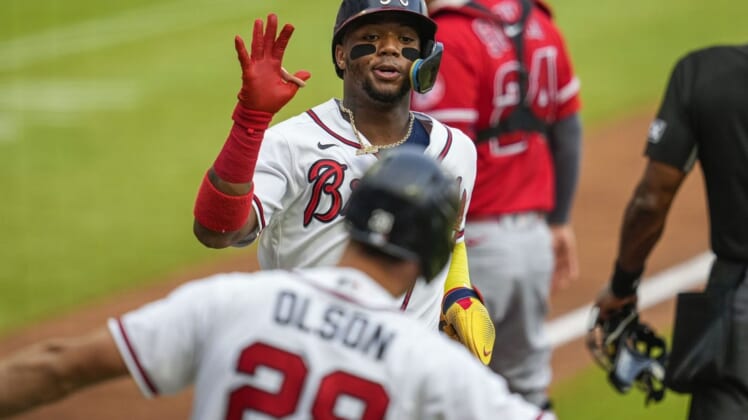 Riley went 3-for-4, scored two runs and drove in two runs, giving the third baseman a team-leading 63 RBI. He singled in the first inning to extend his hitting streak to 15 games, and the home run was his eighth during the stretch.

The homer was also controversial.

Reliever Austin Warren appeared to have struck Riley out in the fourth inning, but first base umpire John Bacon said on appeal that Riley had checked his swing. Given an extra swing, Riley hit a towering blast into the left-field terrace.

Los Angeles interim manager Phil Nevin was incensed at the perceived missed called and began a steady verbal barrage toward Bacon and home plate umpire Alan Porter until he was ejected in the fifth inning.

Wright (12-5) pitched six innings and allowed two runs on seven hits while picking up eight strikeouts. It was his fifth straight victory. His biggest mistake was allowing a solo homer to Shohei Ohtani, his 20th of the season.

The Braves scored two runs in the first inning on an RBI single from Dansby Swanson, who came around to score on a forceout.

Atlanta upped the lead to 5-0 with a three-run rally in the third. Marcell Ozuna drove in a run with a base hit and Michael Harris II plated two more with a bases-loaded single.

Atlanta’s Adam Duvall was removed from the game with left wrist soreness in the third inning.

The Braves have won the first two games of the series and nine of their last 12. Los Angeles has lost five straight.