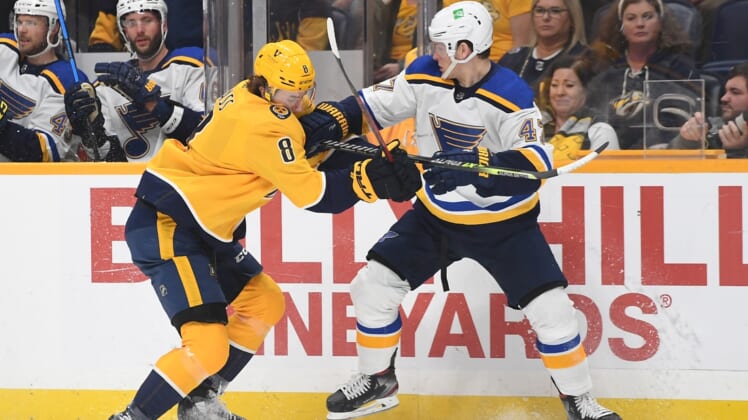 Nick Cousins, Luke Kunin and Dante Fabbro scored for the Predators (43-28-5, 91 points), who have won just two of their last six games.

The Predators struck first, but the Blues tied the game 1-1 with 2:19 left in the first period on the power play. Ryan O’Reilly set up Schenn’s goal from the high slot.

Tarasenko started the surge by charging up the right wing and fending off Alexandre Carrier to extend his goal-scoring streak to five games.

After Binnington made a spectacular save on Roman Josi, the Blues countered with a 3-on-2 rush. Rosen jumped up to convert a pass from Robert Thomas, who extended his point streak to 13 games.

Kyrou then scored on a give-and-go play with Pavel Buchnevich. After Rittich replaced Saros, Rosen made a back-door cut to make it 5-1.

Walker scored on Logan Brown’s centering pass, then Schenn scored on a break-in set up by Ivan Barbashev to make it 7-1.

After Kunin scored for the Predators, Barbashev set up Kyrou to make it 8-2.

Fabbro’s goal cut the lead to 8-3 midway through the third.