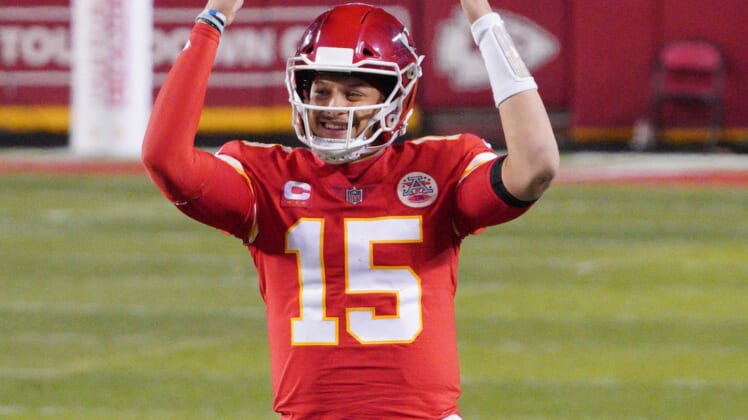 He was stationed in the back of the team’s public relations department, sitting in front of a screen and staring into a camera.

“They must have shipped this camera in, I’ve never seen it before,” Mahomes cracked.

The differences in having Zoom interviews as opposed to being on the Super Bowl “Opening Night” stage was a frequent topic among players on both the Chiefs and Tampa Bay Buccaneers.

Buccaneers quarterback Tom Brady took a selfie and posted it on social media to show the unusual scene leading to the game in Tampa.

“This is very different than the other nine experiences,” said Brady, who will be playing in his 10th Super Bowl on Sunday.

Mahomes is playing in his second Super Bowl. He said being in Kansas City makes for smoother preparations, but he noted it is vastly different.

“Obviously, just sitting in an empty room and not being in the city of the Super Bowl, it’s a unique experience,” Mahomes said.

Chiefs coach Andy Reid noted his squad was already in Miami last year on the Monday of Super Bowl week, but that he is just fine with being at home.

“I don’t think you have quite as many distractions as you would have in a normal Super Bowl week,” Reid said. “But you still know there is a game ahead that is the Super Bowl and you’re able to focus on it a little bit better.”

–While the Brady-Mahomes matchup will be discussed continually all week, there is another intriguing matchup for the ages.

Kansas City’s Travis Kelce is considered the best tight end in the NFL, a title Tampa Bay’s Rob Gronkowski held for most of his tenure with the New England Patriots.

The 31-year-old Kelce is the only tight end in NFL history with five 1,000-yard receiving seasons. The six-time Pro Bowl selection also accumulated a tight end-record 1,416 receiving yards this season.

“One thing that is very intriguing about Travis Kelce, and I’ve never really seen this with any other player in the NFL ever before, is that Kelce gets better every single year that I’ve seen him play in the NFL. That’s just respect right there.”

Gronkowski, a five-time Pro Bowler, had four 1,000-yard receiving seasons with the Patriots, including 1,327 to go with 17 touchdowns receptions in 2011. He holds the postseason record for tight ends of 1,206 receiving yards.

“Gronk’s career has been unbelievable,” Kelce said. “He will go down in history as one of the best players to ever play the game … The guy is an unbelievable person, talent. I might be one of the biggest Gronk fans out there.

“I’m happy for him to reach the mountain peak all over again. But it’s a little bit personal, man. It’s got to be that way. I’m playing this game to be the best, to be the best I can be for my team on every single play.”

–The Chiefs lost left tackle Eric Fisher (Achilles tendon) during the AFC title game against the Buffalo Bills and Martinas Rankin will likely start in the Super Bowl.

But Reid says who starts on the line isn’t a big factor as the plan is to use an eight-player rotation.

“It doesn’t really matter who is in there, they end up getting familiar with each other,” Reid said. “It’s been an important process and then we can still go there and be productive.

–Kansas City placed center Daniel Kilgore and receiver Demarcus Robinson on the reserve/COVID-19 list. Both players are thought to be close contacts of somebody else who tested positive and could be cleared on Saturday if they continue to test negative.

Reid said that receiver Sammy Watkins (calf) and cornerback L’Jarius Sneed (concussion) both practiced on Monday. Reid indicated both players are on track to play Sunday.

–The status of Tampa Bay’s Antonio Brown (knee) is still in doubt, though Arians said the 32-year-old receiver is improving.

Safety Antoine Winfield Jr. (ankle) also is “getting closer,” according to Arians. The status of safety Jordan Whitehead (shoulder, knee) may not be known until late in the week.

Linebacker Lavonte David (hamstring) isn’t a threat to miss the game, according to Arians, who said, “You’d have to shoot him to keep him out of this game.”

–Brady is aiming to win his seventh Super Bowl title, which would be one more than the total won by basketball icon Michael Jordan.

“Michael is one of my sports idols,” Brady said. “I think he’s pretty incredible. For me, it’s about being a part of a lot of great teams. To have the opportunity to play in this game means a lot to me. … It would just be cool to accomplish it this time.”

–Kansas City wideout Tyreek Hill is known for his blistering speed and a question about whether any Tampa Bay cornerbacks can catch him was sure to prompt a remark from the player with three career 1,000-yard seasons.

“I feel like in my heart that no one can keep up with me,” Hill said. “I’ve ran track. … Somebody in the NFL, I don’t really believe so.”