Super Bowl 56 is a long way off, but now that the full NFL schedule is out, it’s clear a few presumed contenders got unlucky with how the slate broke.

So much of any given season’s success in the NFL comes down to good fortune with scheduling. Having the right opponents at the right times, or easier stretches at pivotal moments, can galvanize an epic run.

Just look at the Tampa Bay Buccaneers, for instance. A late bye week is usually not great, but during a pandemic-shortened year, with Tom Brady adjusting to new digs for the first time in two decades? Not ideal.

But the talent on the star-studded roster was never in doubt, nor was Brady’s will to win. After the Week 13 break, Tampa Bay won out, never looking back en route to the Lombardi Trophy. A difficult pre-bye stretch of four games saw the Bucs face the Saints, Rams and Chiefs — all resulting in losses.

Brady’s presence made all the difference, but everyone involved should be credited with banding together and rallying around each other.

Unfortunately for the teams on this list, such a narrative won’t come to fruition for them. Here are three Super Bowl 56 contenders who drew the short straw on the 2021 NFL schedule.

After making the AFC Championship Game last postseason, there’s hardly anywhere for Buffalo to go but down.

Josh Allen is a surefire superstar at quarterback, but a suspect pass rush that’ll be heavily reliant on rookies and a rushing attack that still needs work are reasons to doubt the Bills. Plus, the AFC East is about to get a lot harder after New England’s aggressive free-agent spending spree and Miami’s continued, impressive rebuild.

Look at the start Buffalo faces: vs. Pittsburgh, at Miami, vs. Washington, vs, Houston, at Kansas City, and at Tennessee.

That’s three championship-caliber defenses out of the gates, plus two road trips to face reigning division champions. An early Week 7 bye on the 17-game schedule isn’t ideal, either.

Everyone is buying big on the Bills now because of Allen’s rapid ascent. Just tread a little cautiously, because while there’s plenty to be excited about in Western New York, expectations should be measured a bit.

Who knows? Maybe Jameis Winston‘s LASIK surgery will help him throw the ball to the other team less, in the event he beats out Taysom Hill for the right to succeed Drew Brees at QB.

That’s not said facetiously, by the way. Because if Winston can take better care of the football in Sean Payton’s system, these Saints have a Super Bowl-ready roster. They pulled off all kinds of salary cap maneuvers to keep most of their core in place, and should be highly competitive in 2021. 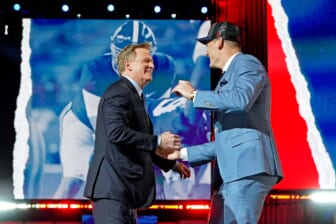 Their first five games: vs. Green Bay, at Carolina, at New England, home for the New York Giants and at Washington. Then? A Week 6 bye.

Assuming Aaron Rodgers is still the Packers’ QB — a trade will be believed when it’s seen — are any of those contests surefire wins for New Orleans? Throw the early idle week on top of that, and it’s a really bad combination.

It sure feels like everyone’s penciling in the Colts to win the AFC South under the assumption that Carson Wentz plays like an MVP candidate and revives his career in reuniting with Frank Reich.

Um, what? Wentz was awful last season in Philadelphia, and he may not have a viable left tackle till reasonably late into the schedule as Eric Fisher continues recovering from a torn Achilles suffered in the AFC title game.

Wentz has a cast of largely unproven receivers around him, with the exception of T.Y. Hilton, who’s not the dynamic deep threat he was in his prime.

The Colts will need to lean heavy on sophomore tailback Jonathan Taylor to lead the offensive charge.

Look at these first several matchups on tap for Indianapolis: hosting the Seahawks and Rams, and then three road trips to Tennessee, Miami and Baltimore. Indy also doesn’t have a bye until Week 14.

If things are going south for Wentz early, with no bye week in sight to regroup, the Colts are going to be in serious trouble.