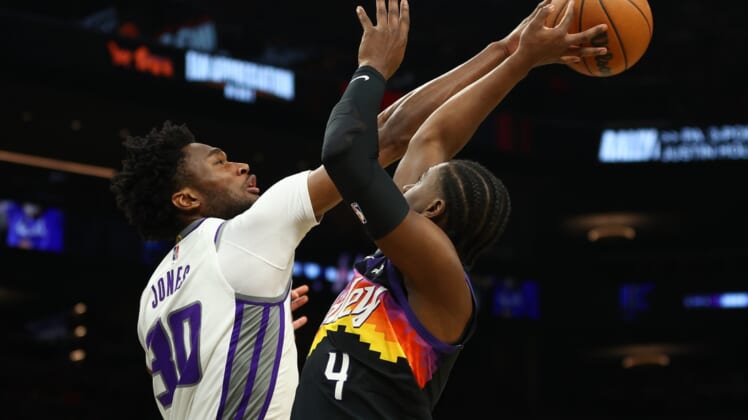 Davion Mitchell posted a double-double of 18 points and a career-high 15 assists, Justin Holiday, Donte DiVincenzo and Damian Jones each scored 19 points, and the Sacramento Kings closed their 2021-22 season with a 116-109 win on the road over the NBA-leading Phoenix Suns on Sunday.

Sacramento (30-52) led throughout, pouncing on a short-handed Phoenix lineup early and building a lead of as many as 19 points.

The Kings shot a red-hot 14-of-26 from 3-point range, paced by Holiday’s 5-of-6 beyond the arc and DiVincenzo’s 4-of-7 off the bench. DiVincenzo matched his scoring high since joining Sacramento in February.

Phoenix (64-18) had most of its starting lineup sidelined on Sunday, including Devin Booker, Deandre Ayton, Chris Paul and Jae Crowder. Only Mikal Bridges appeared in the loss, and he played fewer than six minutes in completing a regular season with 82 starts.

The Suns were also without one of their primary reserves, Cameron Payne, who missed his second consecutive game due to a knee injury.

Landry Shamet picked up the slack for the thin Phoenix roster. He shot 5-of-12 from 3-point range en route to a season-high 27 points.

Shamet scored 10 of his points in the final 3:27 to fuel a furious Suns comeback. The last of his five 3-pointers made with 20.3 seconds remaining pulled Phoenix to within three points after trailing by double-digits for much of the second half.

Shamet again helped trim the deficit to three points when he dished the last of his five assists to Bismack Biyomobo for a dunk with 8.5 seconds remaining, but Phoenix did not score again.

Despite Sunday’s loss, Phoenix heads into the postseason with the NBA’s best record and a franchise-best regular-season win total. Sacramento, meanwhile, concludes its 16th consecutive season without a playoff berth.

The ongoing drought stands alone as the longest in NBA history. The Kings came into the season tied with the Los Angeles Clippers from 1977 through 1991, a stretch that included the organization’s tenures in Buffalo and San Diego.