Suns well-backed favorites to go up 2-0 on Pelicans 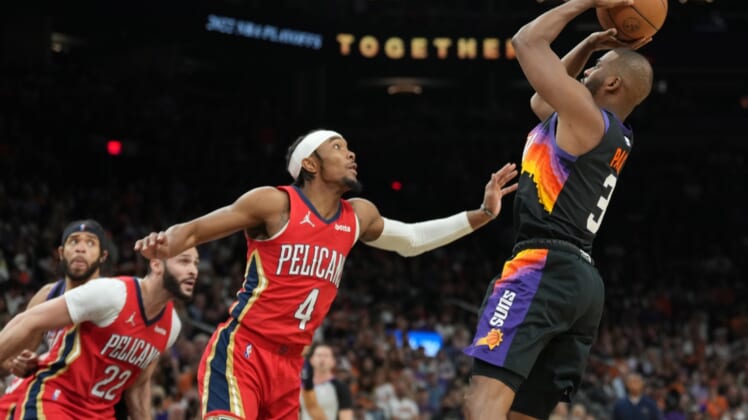 Chris Paul didn’t attempt a single shot in the opening quarter of Game 1 and ended up as the hero for the Phoenix Suns.

So who knows what the veteran point guard has in store when the Suns look to take a 2-0 lead on Tuesday night when they host the New Orleans Pelicans in their Western Conference first-round series.

Paul scored 19 of his 30 points in the fourth quarter on Sunday to single-handedly thwart a New Orleans comeback bid during a 110-99 home victory.

The Pelicans had whittled a 23-point deficit down to 87-81 before Paul went from passing guru to shooting star.

He responded with two 3-pointers, a layup, a short shot and a driving layup through traffic during a span of 3:25 as the Suns stretched their lead to 99-85 with 6:01 remaining en route to putting the game away.

Paul made 12 of 16 field-goal attempts — including 4 of 6 from 3-point range — and also contributed 10 assists, seven rebounds and three steals for the top-seeded Suns.

Paul, who turns 37 next month, said the fourth-quarter splurge occurred because he was just reading the game and could see his team needed a spark.

“I’ve been playing for a while, for a long while,” Paul said. “… Over the course of the game, you try to keep that energy and if I have to score, so be it.”

Phoenix coach Monty Williams could sense it was Paul Time as well.

“It’s just his ability to understand he needs to take over a game,” Williams said. “I don’t think I’ve been around anybody like Chris who has that innate feel for that time.”

Booker had 25 points and eight assists and Deandre Ayton added 21 points and nine rebounds for the Suns, who are 9-3 at home over the past two postseasons.

Eighth-seeded New Orleans is part of the postseason for the first time since the 2017-18 season.

The Pelicans found encouragement that they were able to battle back against the team that posted the NBA’s best record this season. But there also was discouragement about falling behind by such a huge margin.

“We figured out a way to play,” New Orleans forward Larry Nance Jr. said. “This is the playoffs and there are going to be ebbs and flows, ups and downs. We are in a chess match now.”

The Pelicans certainly looked like pawns in the first half when they shot a miserable 22.4 percent from the field. They ended up at 37.9 percent.

“They have some defensive guys who are physical and strong,” Ingram said of the Suns. “We’ll make adjustments. … There are no easy shots in the playoffs. We just have to knock them down.”

But after getting the game close, New Orleans couldn’t keep up with Paul, the 17-year veteran who had at least 30 points and 10 assists in the same playoff game for the 10th time in his stellar career.

“That’s what Chris does down the stretch during games,” said Pelicans coach Willie Green, a former teammate of Paul in New Orleans (one season) and with the Los Angeles Clippers (two seasons). “They’ll put the ball in his hands, and they run pick and rolls. We’ll go back and look at the tape and see how we’ll be better. We definitely have to make him make tough shots. I thought he hit a few big 3s that gave them momentum.”

The Over/Under was at 221.5 points at all three sportsbooks Tuesday afternoon.

Meanwhile, the Under has been the most popular wager on both markets with 68 and 51 percent of the action, respectively.