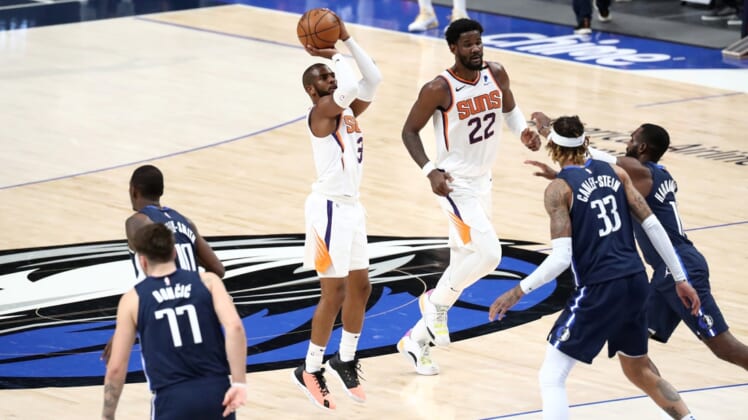 Devin Booker nailed a 3-pointer with 1.5 seconds remaining to cap a wild finish Monday night that gave the visiting Phoenix Suns a 109-108 victory over the Dallas Mavericks.

The contest was tied on 15 occasions, the last time at 106-all when Booker nailed an 18-footer with 55.7 seconds remaining.

After Josh Richardson put Dallas up 108-106 with two free throws one second later, the Suns had multiple shots at a tie, but Booker misfired on a jumper, Chris Paul couldn’t convert at the hoop and Deandre Ayton missed two follow shots, the second of which was blocked by Kristaps Porzingis.

The Suns retained possession, however, and, after a timeout, Booker drilled his game-winner.

Booker, who had missed the Suns’ previous four games with a hamstring injury, went for 24 points in 31 minutes.

Paul led the way in Phoenix’s third straight win with a game-high 34 points, nine rebounds and nine assists, while Ayton finished with 10 points and a game-high 17 rebounds.

Frank Kaminsky added 11 points for the Suns while Cameron Johnson and Mikal Bridges chipped in with 10 apiece.

Doncic totaled 25 points and eight assists for the Mavericks, who held the game’s biggest lead of 11 points in the third quarter.

Porzingis, who sat out Saturday’s game for rest, registered a double-double with 19 points and 10 rebounds. Richardson had 24 points, Tim Hardaway Jr. 18 and Jalen Brunson 11.

Neither team led by more than six points in a tightly contested first half in which there were 10 ties and 12 lead changes.

The Mavericks led 53-47 at the break, then extended their advantage to as many as 11 in the third period before the Suns rallied in the fourth.

There were five ties and five lead changes in the final 9:19.