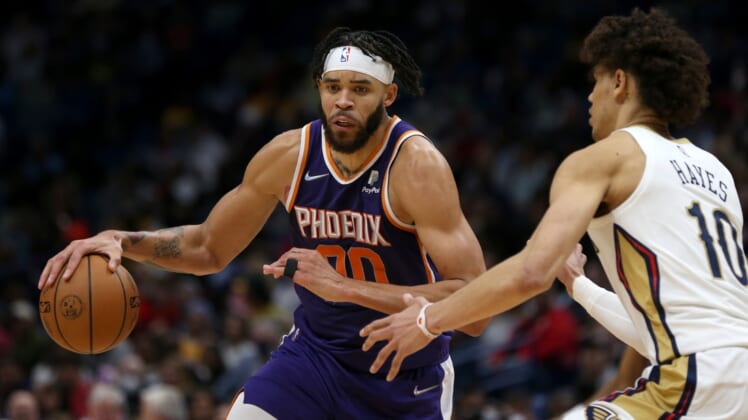 With the best record in the league all but secured, the Phoenix Suns have reverted to every trick in the book in order to muster nightly motivation.

Accomplishing that mission could be even tougher on Wednesday when the Suns visit the NBA-worst Houston Rockets.

Against the New Orleans Pelicans on Tuesday, the Suns leaned into the revenge angle en route to a 131-115 road victory. Phoenix erased a nine-point, first-quarter deficit and secured the lead for good in the second quarter against one of the teams that handed the Suns one of their eight home losses this season.

“We’re the biggest sore losers in the league,” Suns reserve center JaVale McGee said. “We haven’t lost a lot of games, but the teams we have lost to, we mark that on our calendar the next time we see them.”

The Suns have grander aspirations than exacting payback on teams that have defeated them. Their playoff goal is obvious, an NBA title, but achieving that will require a clean bill of health entering the postseason. In the interim, the onus is on the Suns to sharpen the dull edges, if any, during a stretch run that continues at Houston.

Phoenix was without Chris Paul (thumb) and Cameron Johnson (quad) against the playoff-hopeful Pelicans, yet it hardly mattered. Devin Booker scored a team-best 27 points and shared team-high assist honors with Cameron Payne, each contributing eight.

What remains for the Rockets is managing the stretch run of another dismal season with some semblance of professionalism. Houston is aiming for another pick atop the NBA draft while attempting to avoid any blatant displays of tanking.

The Rockets lost 11 of their final 12 games before the All-Star break and have dropped eight of 10 games since, including a pair of uncompetitive losses to the Dallas Mavericks and Pelicans.

Houston trailed by 29 points in its 113-100 road setback to the Mavericks on Friday. The Rockets followed that effort by falling into a 30-point hole before succumbing 130-105 on the road to the Pelicans on Sunday. Jalen Green paced Houston with 17 points at New Orleans, and David Nwaba had 15 points in 14 minutes off the bench.

Blowouts of that magnitude can yield some funky late-game lineups, a development that puts Rockets coach Stephen Silas in a bit of a bind while attempting to advance player evaluation.

“Right now, at this stage of the season, there are some guys I want to look at,” Silas said. “I want to see (Daishen) Nix play. I want to see (Usman) Garuba play a little bit more. And the way that (the Pelicans) were attacking us with their size, having a bigger group with switchability was one of the things I wanted to go to toward the end. Those are the things that I think about as we get to those situations.”