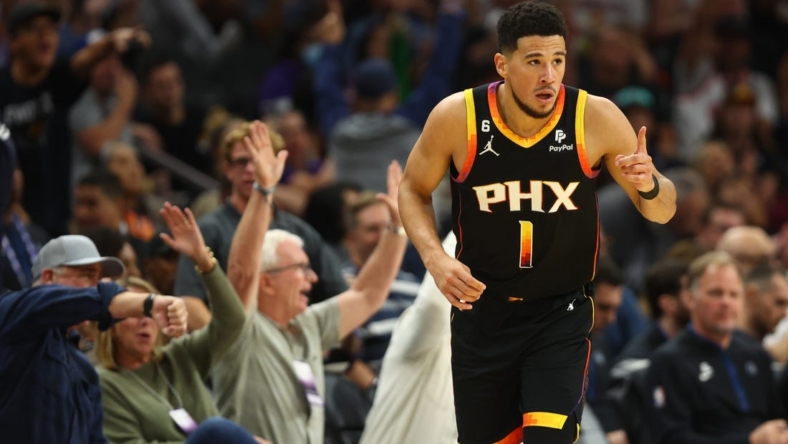 The Portland Trail Blazers are the lone team to defeat the Phoenix Suns this season, but they did so with Damian Lillard in the lineup.

When the ball is tipped Friday night in Phoenix, Lillard will be in street clothes due to his calf injury as the Suns look to avenge that 113-111 overtime defeat in Portland.

It is the first of back-to-back games between the two teams. Saturday’s meeting is also in Phoenix.

Lillard scored 41 points in Portland’s stunning victory on Oct. 21, but he strained his right calf against the Miami Heat five nights later and will miss third straight game.

Suns star Devin Booker scored 33 points against the Trail Blazers and he has scored 30 or more four times this season.

The setback was just the second for Phoenix in the last eight meetings with Portland.

The Suns enter this meeting on a five-game winning streak. They defeated the Minnesota Timberwolves 116-107 on Tuesday.

Booker, who had 18 points, wasn’t the star for Phoenix against Minnesota. Forward Cameron Johnson filled that role by making seven 3-pointers and scoring 29 points.

“Offensively he was really aggressive,” Suns coach Monty Williams said of Johnson. “Everybody was telling him to shoot the ball. He is more than a shooter. He has the ability to make plays. He is a really good passer.”

Johnson has made 12 3-pointers over the last two games and is shooting 44 percent (22 of 50) from behind the arc through seven games.

Johnson, a fourth-year-pro, is averaging 14.9 points in his first campaign as a starter. The Suns promoted Johnson to the role prior to the start of training camp, which prompted veteran Jae Crowder to remain away from the team with both sides hopeful of working out a trade.

Nobody is missing Crowder with the way Johnson is performing.

“I think he is getting more comfortable with the role, but defensively he was really good,” Williams said after the Minnesota game.

Center Deandre Ayton (ankle) practiced Thursday and was upgraded to probable to return to the lineup Friday. He has missed the past two games.

The Trail Blazers have won five of their first seven games, but dropped a 111-106 decision to the visiting Memphis Grizzlies on Wednesday.

Anfernee Simmons scored 31 points to continue his strong play. It was his second straight 30-point effort and he is averaging 22 points.

Portland never led against the Grizzlies but did recover from a 17-point deficit with a 19-2 run to tie the score at 96 with 3:39 remaining in the contest.

“For the most part in this game we had good opportunities,” Trail Blazers coach Chauncey Billups said. “We just couldn’t really capitalize, couldn’t get over the hump. I didn’t love the start of the game for us.”

Big man Jusuf Nurkic added 23 points and 13 rebounds. He loved his team’s comeback but wasn’t pleased with the final result.

“Some bad decisions, some missed shots,” Nurkic said. “Have opportunity to win the game, which is most important thing. Didn’t (go) the way we wanted.”