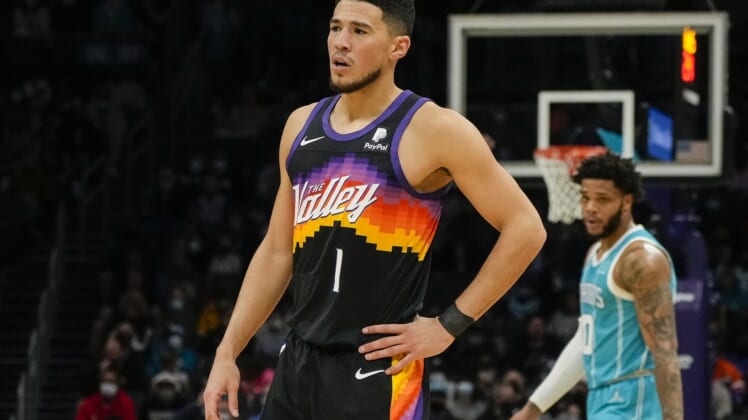 Devin Booker scored 24 points as the Phoenix Suns got back on track with a 133-99 blasting of the host Charlotte Hornets on Sunday night.

The Suns entered having lost three of their previous four games to drop out of the top spot in the Western Conference. On Friday, they were crushed by the Boston Celtics 123-108 to begin a three-game road swing.

Jalen Smith had 19 points for the Suns on Sunday, while reserve Landry Shamet pumped in 17 points and Mikal Bridges had 15. Cameron Johnson and Cameron Payne both had 14 points for Phoenix.

It was quite a show for a Phoenix team without Deandre Ayton, JaVale McGee and Jae Crowder because of COVID-19 protocol. Head coach Monty Williams also was in protocol, while Abdel Nader has a knee injury.

LaMelo Ball had 17 points for the Hornets, while and Kelly Oubre Jr. had 15 and Ish Smith had 11 for Charlotte, which had a three-game winning streak snapped. Miles Bridges, who missed the previous two games while in COVID protocol, added 10 points.

Shamet drained five 3-pointers for the Suns, while Booker, Johnson and Bridges all made three from distance.

Booker had 20 points by halftime as the Suns led 73-47. Paul had only two points at the midway mark but made an impact with 10 assists.

The score was at 38-34 early in the second quarter before the Suns broke away. Smith scored five points in a 10-0 run.

Phoenix finished with a 52-35 rebounding edge.

The Suns defeated the Hornets 137-106 last month in Phoenix.