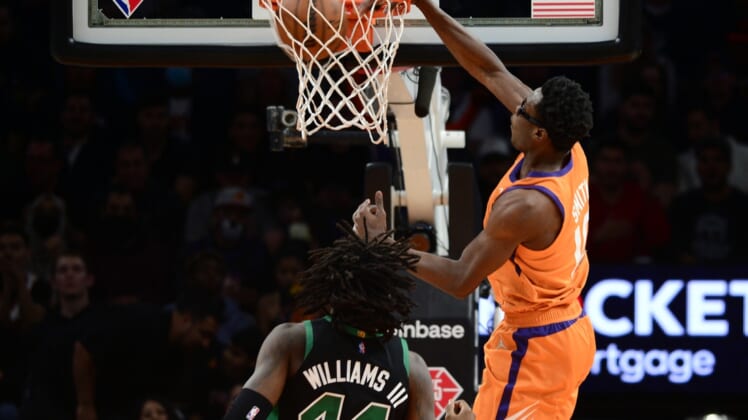 JaVale McGee had a season-high 21 points and grabbed 15 rebounds as the shorthanded Phoenix Suns coasted past the visiting Boston Celtics 111-90 on Friday night for their 20th win in 21 games.

Cameron Payne scored 17 points off the bench and Jae Crowder and Cameron Johnson added 16 points apiece for Phoenix, which played without star guard Devin Booker and center Deandre Ayton. Booker missed his fourth straight game with a hamstring injury while Ayton was sidelined with a non-COVID illness.

Mikal Bridges chipped in 14 while both Chris Paul and Landry Shamet scored 10. Paul also dished out a game-high 12 assists.

Jayson Tatum had a game-high 24 points and seven rebounds for Boston, which dropped its third straight game and ended its five-game West Coast road trip at 1-4.

Schroder played despite being questionable with an ankle injury. The Celtics were without All-Star Jaylen Brown for a fifth straight game as he manages a nagging hamstring injury. Forward Bruno Fernando also sat out with back spasms.

Phoenix led 57-39 at halftime and stretched its lead to as many as 27 points in the second half.

Tatum’s 17-foot jumper brought Boston within 32-30 with 8:16 left in the second quarter before the Suns caught fire and went on a 25-5 run to take control for good.