Suns get off to fast start in triumph over Timberwolves 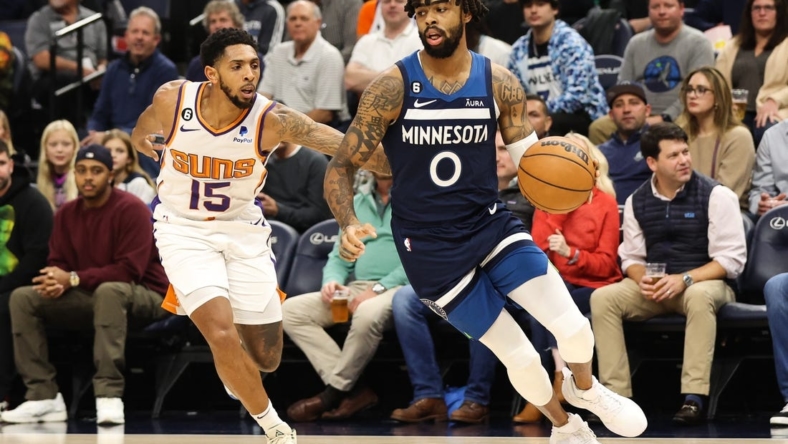 Devin Booker scored 32 points and dished 10 assists, Mikal Bridges scored a season-high 31 points, and the Phoenix Suns went on a 14-0 run in the first quarter that gave them a lead they never relinquished en route to a 129-117 win over the Minnesota Timberwolves on Wednesday in Minneapolis.

Phoenix’s big first-quarter run flipped an 18-15 deficit into a 29-18 lead in fewer than three minutes. The burst powered the Suns to a 39-point first quarter — one game after Minnesota had surrendered 38 points in each of the first two quarters in a loss to New York.

Another run of 16-7 over the final 4:23 of the second quarter pushed the Phoenix lead to 18 points by intermission. It remained a double-digit-point margin throughout the second half, growing to as many as 27 points.

The Suns offense clicked thanks to unselfish play, with Phoenix producing 31 of its 47 made field goals off assists. Cameron Payne dished for eight, complementing his season-high 23 points — one off his career high — as he started in place of Chris Paul.

Paul came out of the Suns’ loss in Philadelphia on Monday with right heel soreness.

Bridges added five assists to go along with his team-high nine rebounds.

Along with their distribution, Booker and Payne also led the way to Phoenix shooting a torrid 16-of-35 from 3-point range. Booker went 5-of-7 from beyond the arc, and Payne shot 4-of-9. Landry Shamet, who scored 16 points off the bench, chipped in 2-of-3 shooting from long range.

Three-pointers helped make the difference, as Minnesota shot 41-of-78 from the floor, but just 9-of-27 from behind the line. The Timberwolves were also dominated in second-chance points, 18-8.

Rudy Gobert led Minnesota in his return from COVID-19 health and safety protocols, scoring 25 points on 8-of-11 shooting from the floor with a game-high 11 rebounds. Jaden McDaniels added 24 points, and D’Angelo Russell finished with 20.

The Timberwolves’ season-long leading scorers, Anthony Edwards and Karl-Anthony Towns, managed just 11 points each. Both were limited due to foul trouble.