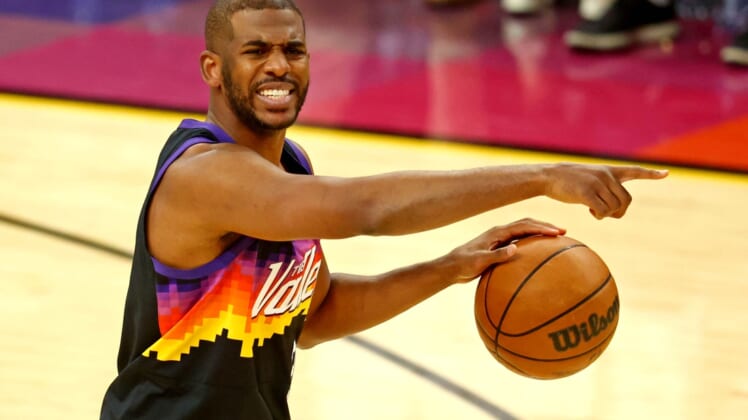 Devin Booker’s hamstring injury changes the complexion of the first-round series between the high-powered Phoenix Suns and the New Orleans Pelicans.

What was viewed as a walk in the park for the top-seeded Suns is now a dead-even competition as Phoenix visits the Pelicans in Game 3 on Friday night.

Booker is expected to miss the rest of the series after sustaining the injury in the third quarter of Tuesday’s Game 2. He injured his right hamstring while chasing New Orleans’ Jaxson Hayes in transition as the latter scored on a dunk.

Booker grimaced and grabbed the back of his right leg. He said something to teammate Chris Paul and the Suns called timeout with 4:35 left in the quarter.

Booker’s night was done with the Suns trailing by three. The Pelicans outscored Phoenix 48-40 the rest of the way to record a 125-114 road victory.

Suddenly, eighth-seeded New Orleans has life in the series plus homecourt advantage, with three of the potential five remaining games on its own floor.

The Suns opened as 2.5-point Game 3 favorites at BetMGM, but the line has shifted to 1.5 despite Phoenix drawing 80 percent of the spread bets and 78 percent of the handle. The line is also 1.5 at DraftKings, where the Suns have been backed by 77 and 83 percent, respectively.

Booker scored 31 points and made seven 3-point baskets in the first half of Tuesday’s game.

The Suns, who recorded an NBA-best 64-18 record this season, were just 8-6 without Booker in the lineup.

Williams said it would be next man up, which apparently means the role of journeyman shooting guard Landry Shamet will increase. Shamet just returned from a foot injury and didn’t play in Game 1. He had five points in 12 minutes of Game 2.

The fifth-year pro averaged 8.3 points in 69 games (14 starts) this season. The Suns are his fourth team in four seasons.

Forward Cameron Johnson could slide into the backcourt and Aaron Holiday could get some minutes. Holiday hasn’t played in the series.

Regardless, the Pelicans now have a legitimate chance to win the series. Just five No. 8 seeds have upset a No. 1 seed and New Orleans will give it a shot behind the duo of forward Brandon Ingram and shooting guard CJ McCollum.

Ingram scored 18 points on just 6-of-17 shooting in New Orleans’ loss in Game 1 but bounced back with 37 points, 11 rebounds and nine assists on Tuesday. He was 13 of 21 from the field and made all three 3-point attempts.

McCollum made six 3-pointers while contributing 23 points, nine assists and eight rebounds. He scored 25 in Game 1.

Veteran forward Larry Nance Jr. also played with Ingram on the Los Angeles Lakers and said his friend is ready to take over.

“B.I. is him. He’s that guy,” Nance said. “I watch guys like B.I. and CJ and sometimes it’s like they’re playing a different sport. They’re that impressive. To them, that’s normal. Sometimes, the support characters need to uplift those guys and let them know, ‘Hey, you’re really that guy. I believe in you.’

“I just want to make sure (Ingram) knows this whole team is rocking with him.”

Already in his sixth NBA season, this is Ingram’s first time in the postseason. He is in his third season in New Orleans after playing three with the Lakers.

“Throughout this year I had confidence that we would be here,” Ingram said. “I didn’t know what it would look like, but we continued to get better every single day with (coach Willie Green) being positive every single day and helping guys and teaching guys every single day.”

As for the Suns, another disappointing fact about Game 2 is that New Orleans scored 69 second-half points. Typically, it is Phoenix that turns up the heat.

“We normally don’t get outplayed from an intensity standpoint,” Williams said. “You have to give them credit.”

The Over/Under market at both sportsbooks is the lowest among Friday’s three NBA playoff matchups.