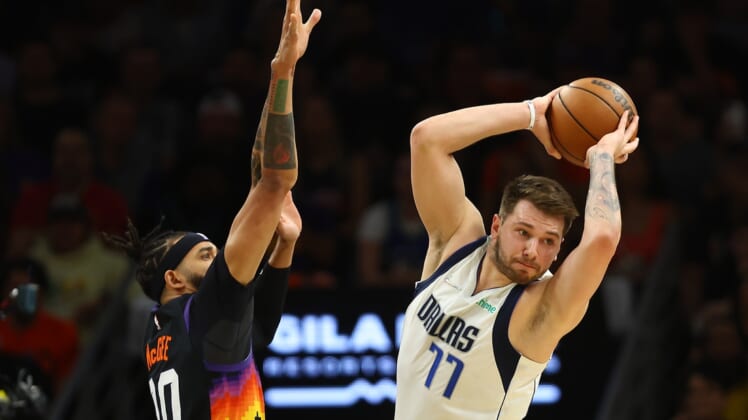 Devin Booker scored 21 of his 30 points in the second half and the Phoenix Suns took a 2-0 series lead with a convincing 129-109 victory over the visiting Dallas Mavericks on Wednesday night.

Chris Paul tallied 14 of his 28 points in the final quarter and also contributed eight assists for the Suns, who knocked out the Mavericks with a 23-2 fourth-quarter surge to turn a close game into a 27-point margin.

Luka Doncic scored 35 points for the Mavericks, who led by two at halftime of the Western Conference semifinal contest before being outscored 71-49 in the second half. Doncic is averaging 40 points in the series.

Game 3 is Friday night in Dallas.

Jae Crowder recorded 15 points and seven rebounds and Mikal Bridges added 11 points and six assists for the Phoenix. The Suns shot a scorching 64.5 percent from the field and made 13 of 25 3-point attempts.

Dallas connected on 45.6 percent of its attempts and was 17 of 41 from behind the arc.

Phoenix led 76-68 after Bridges’ basket with 5:22 left in the third quarter. Bullock then drained three 3-pointers in 73 seconds during a 10-2 burst in which Dallas knotted the score at 78.

The Suns rebounded by scoring 11 of the quarter’s last 16 points to take an 89-83 lead into the final stanza.

Phoenix continued to play well early in the fourth as Paul broke loose to score 14 points in the first 4:56 of the quarter. He had seven of the points during an 11-0 burst that saw the Suns boost their lead to 110-93 with 6:31 left in the contest.

After Paul went on the bench, Booker buried three 3-pointers in a span of 62 seconds to increase Phoenix’s lead to 119-95 with 4:13 left. Ish Wainright knocked down another trey 24 seconds later to make it a 27-point margin and the Suns cruised to the finish.

Doncic scored 24 first-half points to help the Mavericks lead 60-58 at the break. Crowder tallied 15 in the half for the Suns.

Phoenix jumped out to a quick 12-2 lead before Dallas recovered to trail 32-28 at the end of the quarter. The Mavericks led by as many as five in the second quarter before settling for the two-point edge.