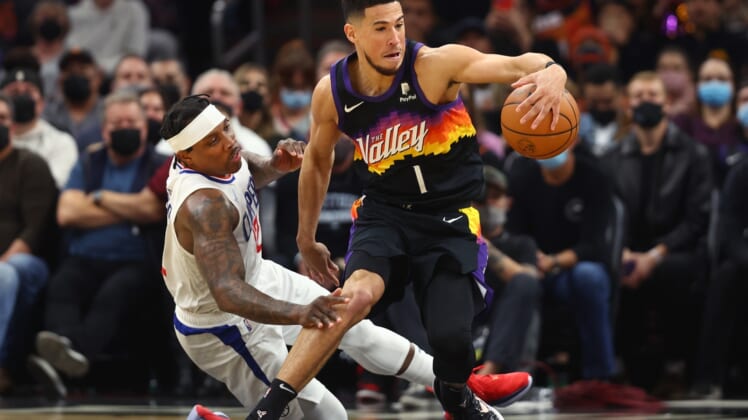 Cameron Johnson scored a career-best 24 points and grabbed seven rebounds and Jalen Smith matched his career highs of 19 points and 14 rebounds to help the Phoenix Suns notch a 106-89 victory over the visiting Los Angeles Clippers on Thursday night.

Chris Paul contributed 14 points, a career-best 13 rebounds and 10 assists to register his first triple-double of the season and 17th of his career. Devin Booker had just 11 points on 5-of-22 shooting and Cameron Payne had 10 points.

Phoenix is the first NBA team to reach 30 wins this season. The Suns’ 30-8 start is the second-best in franchise history, trailing the 31-7 put together by the Steve Nash-led 2004-05 squad.

Marcus Morris Sr. scored a season-high 26 points and grabbed eight rebounds for the Clippers, who lost for the eighth time in their past 11 games.

Reggie Jackson had 16 points and Eric Bledsoe and Brandon Boston Jr. each had 10 for Los Angeles.

Phoenix again was without Deandre Ayton, Jae Crowder and JaVale McGee. All three players cleared the COVID-19 protocol but were held out due to conditioning ramp-up.

The Clippers played without Luke Kennard and Ivica Zubac. Both players are in the COVID-19 protocol.

The Clippers connected on 36 percent of their shots, including a shaky 6 of 28 from behind the arc.

Los Angeles used a 10-2 run early in the fourth quarter to move within 79-76 with 8:36 remaining in the contest. Mikal Bridges responded with two consecutive baskets to push the Phoenix lead to seven.

The Clippers received a three-point-play from Morris to move within 87-83 with 5:14 remaining.

But Paul connected on a 3-pointer and delivered sharp passes to set up Johnson’s layup and Smith’s dunk to give the Suns a 94-83 lead with 3:37 left.

Phoenix opened the second quarter with 11 straight points to take a 32-20 advantage. The lead reached 51-32 on Booker’s bucket with 2:52 to play.