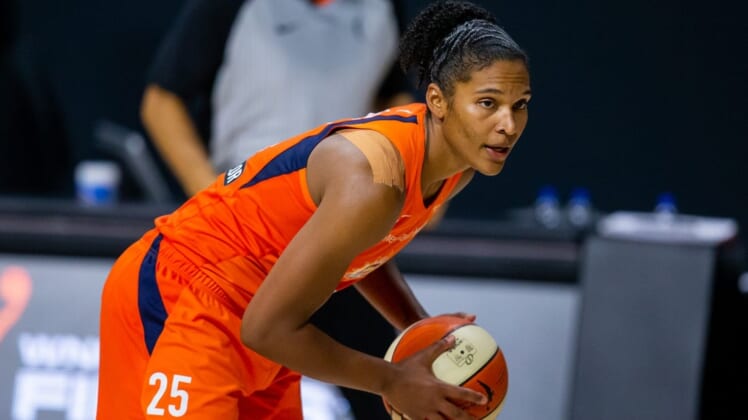 Alyssa Thomas aims to follow up a big milestone when the Connecticut Sun face the Minnesota Lynx on Sunday night in the second end of a back-to-back between the teams in Minneapolis.

Thomas, a three-time All-Star, has played all nine of her WNBA seasons with Connecticut.

“It’s not easy to do it at this level, and so to get this definitely means a lot,” Thomas said afterward.

It was the 17th triple-double in WNBA history, including postseason play, and six of them have occurred this season. Thomas, 30, is the 11th different player to post one.

“What isn’t a surprise is, you know the competitor, you know how she’s going to compete each and every day,” Sun coach Curt Miller said of Thomas. “And there’s a comfort as a coach that you know how hard she’s going to lead by example and play and just will other people, and certainly people feed off that.”

Thomas’ exploits helped the Sun (18-9) win for the fourth time in the past five games.

Lynx coach Cheryl Reeve wasn’t thrilled with her team’s play and questioned the will of the players afterward. Minnesota currently stands two games out of the eighth and final playoff spot and Reeve didn’t see a lot of fight.

Minnesota’s Aerial Powers felt it too.

“That’s a good question,” Powers said. “I think Coach is right. I feel like our will wasn’t there. We know the position we’re in, fighting for the eighth spot. We know every game matters. We just have to be better.”

Powers led the Lynx with 14 points on Friday. She is averaging 10.5 points over the past four games after going on a three-game spree in which she averaged 29.7.

DeWanna Bonner added 20 points on 8-of-12 shooting for the Sun. It was Bonner’s third 20-point outing of the season.

The teams meet a third and final time in the regular-season finale in Connecticut on Aug. 14.