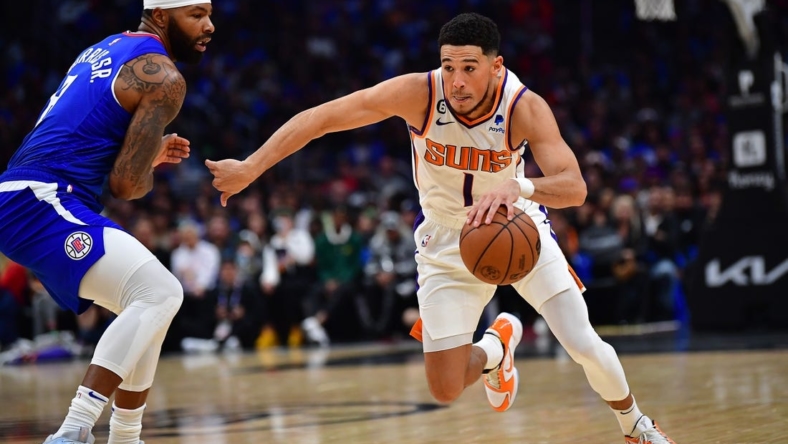 The Phoenix Suns are demonstrating that they plan to be the top team in the Western Conference again this season.

The Suns are fresh off two dominating wins by an average of 23 points vs. conference foes and look to notch another when they host the short-handed New Orleans Pelicans on Friday night.

New Orleans will be without Brandon Ingram (concussion), but sidekick Zion Williamson (hip, back) could possibly return after a one-game absence. Williamson is listed as questionable.

While the Pelicans and Suns are each off to 3-1 starts, Phoenix is resembling the squad that won an NBA-best 64 games last season.

The Suns easily handled the host Los Angeles Clippers 112-95 on Sunday, and they followed up with a 134-105 whipping of the defending NBA champion Golden State Warriors on Tuesday in Phoenix.

Devin Booker led the assault against Golden State with 34 points and seven assists. The three-time All-Star has topped 30 points in three straight games and is averaging 32.5 points and 5.8 assists while shooting 48 percent from 3-point range.

“Probably the most complete player in the league right now,” Suns coach Monty Williams said of Booker. “There’s no weaknesses in his game.”

Chris Paul enjoyed his best game of the young season against Golden State by recording 16 points, nine assists and seven rebounds. Paul also knocked down 4 of 5 3-point attempts after going 1 of 11 in Phoenix’s first three games.

“A lot of teams last year in the playoffs were trying to pick me up full court with me being the primary ball-handler,” Paul said. “It’s fine. I can actually shoot.

The Suns and Pelicans met in the first round of the Western Conference playoffs last season. New Orleans posted two double-digit victories, though the Suns won the series in six games.

Williamson, who sat out last season due to a foot injury, is averaging 22 points and 6.7 rebounds this season. He has missed one game since getting hurt against the Utah Jazz on Sunday.

Williamson was driving to the basket but lost his balance when Utah’s Jordan Clarkson flew in and blocked his shot. Replays showed Clarkson got all ball.

“I’m feeling better. That was a hard fall,” Williamson told reporters on Thursday. “I’ve taken a lot of falls, but damn. But I’m feeling a lot better each day.”

Ingram, who is averaging 22 points, 5.7 rebounds and four assists, also exited against the Jazz after being struck in the head. He went into concussion protocol on Monday.

Herbert Jones (knee) also was hurt against Utah, and he sat out the Pelicans’ 113-111 home win over the Dallas Mavericks on Tuesday. He is questionable for Friday.

The Pelicans played well without the trio against Dallas, receiving a monster game from Trey Murphy III, who hit all eight of his shots — including four 3-pointers — while scoring 22 points.

The Suns have won eight of the past 11 regular-season meetings with the Pelicans.