Suns aim to clinch No. 1 seed with win in Denver 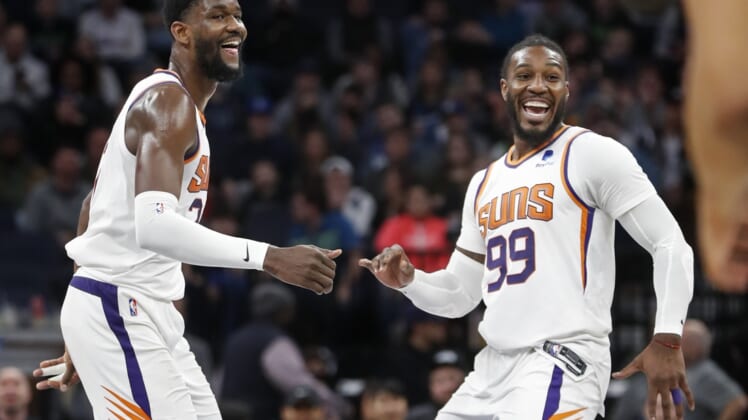 The Phoenix Suns essentially could end the competitive portion of their regular season on Thursday.

Phoenix would clinch the No. 1 seed in the Western Conference playoffs with a road win over the Denver Nuggets.

The Suns (59-14) earned their sixth straight victory when they beat the Minnesota Timberwolves 125-116 on Wednesday in Minneapolis. However, Phoenix missed out on a chance to settle the West race when the Memphis Grizzlies beat the Brooklyn Nets 132-120.

The Suns, the Western Conference champion last season, became a contender due in large part to Chris Paul, although the team has shown it can win without its leader.

Of course, that doesn’t mean the Suns don’t want him back.

Paul has been out since the All-Star break with a fractured right thumb, an injury that could have been a blow to Phoenix’s drive to lock down the top seed. However, the Suns are 11-4 without Paul in the lineup.

Paul is still not ready to come back despite returning to practice this week. Coach Monty Williams is encouraged by the veteran’s progress but doesn’t have a target date for his return.

“Chris has been able to do more and more in increments the last few days,” Williams said. “What that means, I’m not going to say anything from an official standpoint, but he is moving closer.”

Phoenix got a boost Wednesday when Jae Crowder (ankle) and Cameron Payne (non-COVID illness) were able to play and contribute in the win over Minnesota. However, the quick turnaround will be tough, especially against a team that is fighting to stay out of the play-in bracket in the Western Conference.

The Suns did Denver a favor by beating the Timberwolves, as the Nuggets (43-30) now lead Minnesota by 1 1/2 games for the sixth seed.

The Thursday game will be the third and final meeting between the teams and the only one taking place in Denver. The Nuggets beat Phoenix 110-98 on opening night back in October, and the Suns got even with a 126-97 win on Nov. 21. The latter result came in the middle of an 18-game winning streak for Phoenix.

Denver is coming off a big win against the Los Angeles Clippers on Tuesday night, 127-115, a result that ended a two-game overall losing streak and a three-game skid at home. Unlike the Suns, the Nuggets aren’t sure if they will get back their star guard, Jamal Murray, or forward Michael Porter Jr. before the end of the season.

Murray has missed the entire season while rehabbing a repaired torn left anterior cruciate ligament. Porter hasn’t played since Nov. 6 due to a back injury that required surgery.

Denver does have Nikola Jokic playing at a high level, and he has carried the team into playoff position. He rebounded from a rare off night in a loss to the Boston Celtics on Sunday by amassing 30 points, 14 rebounds and six assists against the Clippers.

If the Nuggets want to stay out of the play-in, they’ll need more than just Jokic to play well.

“Nikola is an MVP,” said Denver coach Michael Malone, who received a multiyear contract extension on Wednesday. “But this team with 10 — now nine — games to go needs everybody to step their game up down the stretch and alleviate some of the pressure that is put on Nikola every night, the double-teams, the fronts or whatever it may be.”