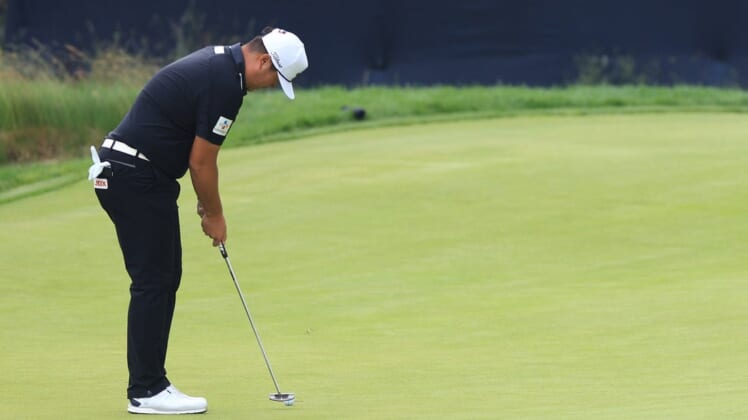 Sungjae Im of South Korea birdied four of his final six holes to tie Scott Piercy at 6-under-par 65 for the first-round lead at the 3M Open on Thursday at TPC Twin Cities in Blaine, Minn.

Im and Piercy finished the day with a two-shot cushion over Tony Finau, Doug Ghim, Tom Hoge, Brice Garnett and Argentina’s Emiliano Grillo, who were tied for third at 4-under 67.

He started on the back nine and went 2 under before catching fire late. Im sank a 15-foot birdie putt at the par-3 fourth hole, made another birdie at the par-5 sixth and rolled in birdies of 23 and 26 feet at the seventh and ninth holes.

Im was much happier with his putting after a few weeks of struggling with the flat stick culminated with him tying for 81st at The Open Championship last week.

“His backstroke, he usually has inside,” Im’s translator said. “But he’s trying to make like a straight backswing and then maintain the club face width, and it’s good for him.”

Piercy, meanwhile, owns four PGA Tour victories but none since 2018. The 43-year-old hasn’t had a top-10 finish this season.

Piercy went 2 under through nine holes before recording birdies on Nos. 10, 11, 13 and 14 to surge into the lead. Three of those birdie putts were longer than 19 feet, including a 31-footer at the par-3 13th.

“I felt like I struck the ball well all day,” Piercy said. “With the winds being crossed and swirly, I felt like I hit good, solid shots into the conservative parts of the green. I felt like I didn’t have very difficult putts, even though they were long.”

Im and Piercy each had seven birdies to one bogey. Of the five golfers tied for third, only Ghim and Grillo turned in bogey-free cards.

Among notable names, Rickie Fowler and Australia’s Jason Day carded rounds of 1-under 70.

Defending champion Cameron Champ opened with a 4-over 75.

Jeff Overton shot a 6-over 77 in his first start on tour in five years. Overton developed a life-threatening infection in his spine in 2017.

Japan’s Hideki Matsuyama withdrew after a first-round 77, citing a sore wrist. Matsuyama, who entered the week as the highest-ranked player in the field both in the Official World Golf Ranking and the FedEx Cup standings, put three straight shots into the water at the par-5 18th hole and carded a quadruple-bogey 9.