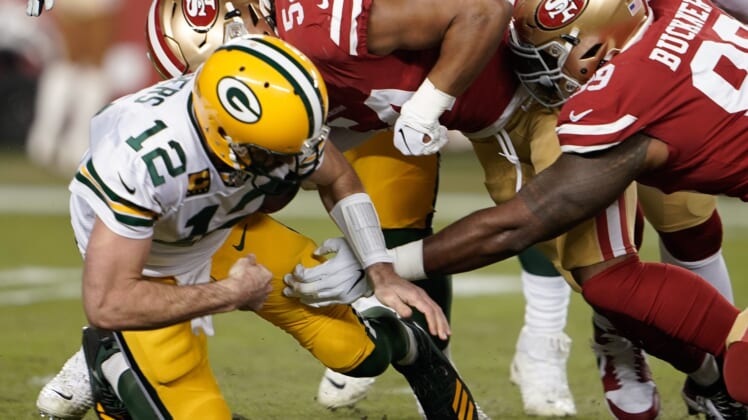 The San Francisco 49ers laid waste to the Green Bay Packers on Sunday Night Football, winning by the score of 37-8. A game that was billed as a heavyweight matchup between two of the top NFC contenders quickly devolved into a one-sided blowout.

As it has done all year, the San Francisco defense came up with a turnover early and never let up. Thanks in large part to the defense, the 49ers led the Packers 23-0 at the half.

The Packers woke up with a small spark of offense in the second half. Unfortunately for them, the 49ers didn’t let up a bit and continued to pour it on. The end result was a blowout win for the 49ers.

These are the biggest winners and losers from the 49ers’ huge win over the Packers on Sunday Night Football.

Winner: Fred Warner gets 49ers off to hot start

It didn’t take long for the dynamic 49ers defense to make a statement on the national stage during Sunday Night Football.

On the fifth play of Green Bay’s opening drive, Rodgers dropped back on 3rd-and-10. He was immediately under pressure from multiple angles as San Francisco’s pass rushers got through. As Rodgers attempted to get out of trouble, Fred Warner wrapped him up and forced a fumble (watch here).

Nick Bosa recovered the fumble for the 49ers. One play later, and the 49ers scored the first touchdown of the game on a Tevin Coleman two-yard run. This sequence set the tone for what was ultimately a night of pure domination for the NFC-leading 49ers.

Starting on the opening drive of the game, Aaron Rodgers was under the influence of constant, relentless pressure. And it wasn’t long until it became clear he was rattled, pure and simple.

San Francisco’s defense got to Rodgers for three sacks an five total hits in the first half, and the veteran gunslinger had just nine net passing yards heading into the locker room at halftime.

Not surprisingly, Rodgers did a little better than all that in the second half. But his final numbers are still stunning: Completing 20-of-33 passes, Rodgers netted 66 yards for a net average of two yards per attempt.

This is a testament to the power of San Francisco’s defense. But it’s also a stark reminder that Green Bay’s offense is far from perfect.

As much as it killed him to do it, George Kittle was forced to sit out the last two games the 49ers played due to an ankle injury that’s reportedly a fracture, along with a knee injury. In his first game back, Kittle had a night to remember.

By halftime, the 49ers tight end already had five catches for 68 yards. Then in the third quarter he ripped off a tremendous 61-yard touchdown to add to his gaudy total.

In the end, the third-year star tallied six catches for 129 yards and the touchdown. Even better, his presence on the offensive line helped spark the team’s running game.

Kittle is the MVP of the San Francisco offense. It’s not even a contest. He showed up big on Sunday night when his team needed him the most, helping the 49ers improve to 10-1 on the season.

The Packers’ leading rusher at halftime was Allen Lazard, who gained 21 yards on a reverse. And that was just the start of the problems. Starting right tackle Bryan Bulaga was injured early, and his replacement, Alex Light, was helpless to stop the likes of Arik Armstead, Nick Bosa and Co.

Rodgers was running for his life all night long. He finished the game having been sacked five times and was obviously struggling to get into rhythm with his receivers due to the lack of protection up front. It was ugly.

Early on, it was clear that Jimmy Garoppolo was working hard to not make any big mistakes. Green Bay’s defense, led by Za’Darius Smith, got plenty of pressure early, and Garoppolo was a bit tentative to unleash downfield. However, he got into a bit of a groove in the second quarter, starting when he connected with Deebo Samuel on a 42-yard touchdown.

That big play seemed to loosen up the entire offense. Then in the third quarter, the game was blown wide open when Garoppolo found Kittle wide open deep down the middle of the field for a second touchdown. All told, the veteran completed 14-of-20 passes for 253 yards with two touchdowns and zero interceptions.

The NFC is top heavy. There are five teams with at least eight wins, and you can bet the other three not named the Packers were a bit upset that the 49ers didn’t drop a game this week.

Now at 10-1 on the season, the 49ers are a game ahead of the New Orleans Saints and Seattle Seahawks and two games ahead of the Packers and Minnesota Vikings. There is still plenty of time left in this season, but every week the 49ers win, the closer they move to securing the No. 1 overall seed in the NFC.