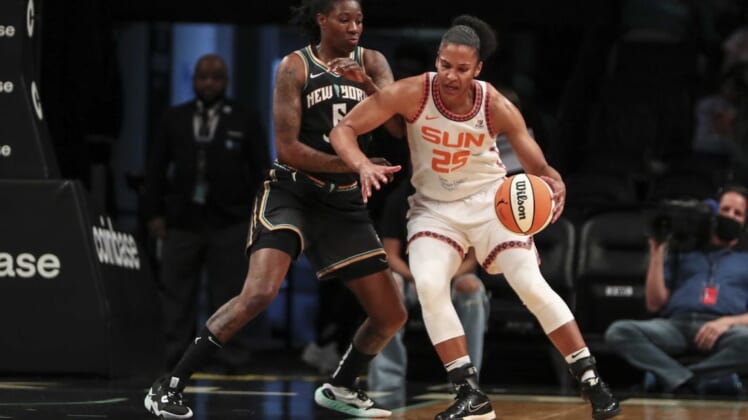 Four Connecticut Sun players scored during a late 10-0 run on the way to a 79-71 victory over the visiting Washington Mystics in a matchup between the Eastern Conference’s top two teams Saturday night at Uncasville, Conn.

Alyssa Thomas, Courtney Williams and DeWanna Bonner all had 14 points for the Sun (6-2). Brionna Jones added 13 points off the bench.

Ariel Atkins and Kennedy Burke both had 13 points, while reserves Elizabeth Williams with 12 points and Tianna Hawkins with 10 points also helped the Mystics (6-3).

Trailing 68-67, Thomas’ 16-foot shot began the rally. Then Natisa Hiederman scored on a drive, Courtney Williams made a free throw, Bonner connected from 3-point range and Williams bagged a jumper.

By then, the Sun led 77-68 with about 2 1/2 minutes to play. It turned into a scoring drought of almost four minutes for the Mystics.

The Sun was without reserve forward Joyner Holmes, coach Curt Miller and assistant coach Brandi Poole because of health and safety protocol. Assistant coach Chris Koclanes directed the team in place of Miller, a two-time WNBA Coach of the Year.

The Mystics were without leading scorer and rebound Elena Delle Donne, who had what was described as a scheduled day off based on the team’s efforts to monitor her workload. Plus, forward Alysha Clark was in health and safety protocol.

The Sun shot 61.3 percent in the first quarter, but trailed 23-21. That came in part because of its seven turnovers compared to one turnover charged to the Mystics.

Connecticut led 57-49 late in the third quarter, but a stretch of nearly six minutes without a field goal extending into the fourth quarter allowed the Mystics to surge into a 59-57 lead.

The Sun finished with a 41-19 rebounding advantage, topped by 10 boards from Thomas and eight more from Jones. That statistic helped offset Connecticut’s 18 turnovers compared to Washington’s eight giveaways.