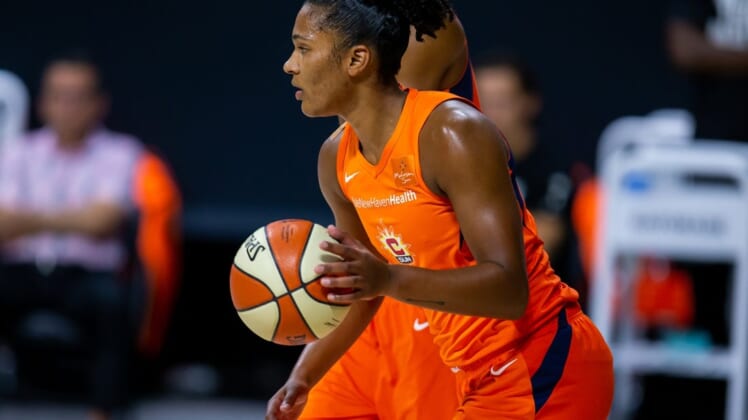 The Connecticut Sun don’t necessarily need the type of dominance they displayed in their playoff opener.

But an encore against the Dallas Wings would be nice as the Sun look to close out the best-of-three first-round series in Game 2 on Sunday afternoon in Uncasville, Conn.

“We got to get back to work. I have great respect for Dallas and their coaching staff,” Sun coach Curt Miller said. “We had a big margin of victory in one game (vs. the Wings) this year, but they won the regular-season series. So it doesn’t matter how much you win by, this is a series.”

Thursday night’s 93-68 final became a showcase for the Sun.

In the Game 1 romp, five Connecticut players scored in double figures, while Alyssa Thomas had a double-double with 15 points and 10 rebounds.

“When we’re best, I think is when we have great balance,” Miller said. “We didn’t get stuck playing through one action or one person.”

Even guard Odyssey Sims going to the bench with an ailment didn’t seem to be a major concern for the Sun.

“She just became sick to her stomach,” Miller said.

The Wings went 5-2 in August to close the regular season, but the postseason opener was jarring.

“The first thing I told my team is ‘I don’t recognize my team,'” Dallas coach Vickie Johnson said.

Allisha Gray racked up 17 points in Game 1 for the Wings, but it was mostly an uneven and disconnected performance for Dallas.

“We went back to our old habits, complaining, not taking accountability, and looking at ourselves first. So, we have to change that,” Johnson said. “If we think we can do it individually and beat Connecticut, it’s not going to happen.”

Miller said the key was holding the Dallas trio of Gray, Marina Mabrey and Teaira McCowan to a total of 35 points.

The Wings had forward Satou Sabally available for the series after she missed time with injuries. She hadn’t played since July 12 because of an ankle injury until suiting up for Game 1, when she posted 10 points in 15 minutes off the bench.

“It’s hard to battle through injuries,” Sabally said. “Lows have to be taken in account just as the highs are. I think mentally I’m in a good place now.”

Dallas won two of three meetings in the regular season against the Sun.