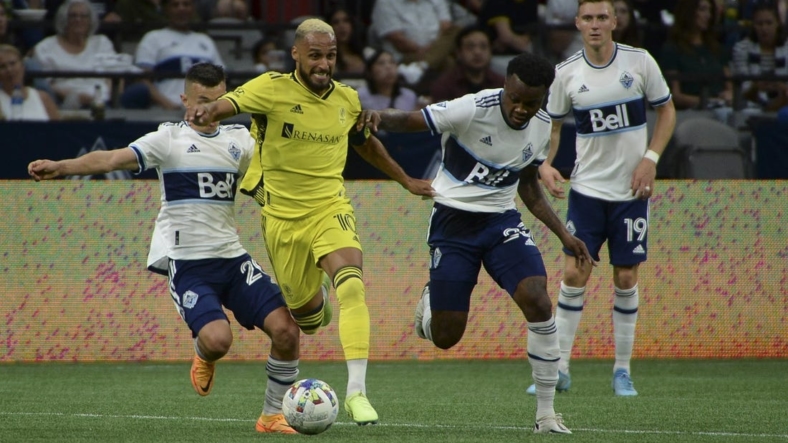 Jack Maher scored his first two goals of the season and Randall Leal also tallied as Nashville SC stormed to a 3-0 victory over the host Vancouver Whitecaps on Saturday night.

Joe Willis didn’t even have to make a save for Nashville while registering his seventh shutout of the season. Nashville is tied for fifth in the Western Conference.

Vancouver (9-12-7, 34 points) was blanked for the sixth time this season. The Whitecaps are tied for eighth place in the West.

Vancouver played most of the second half with just 10 men after Lucas Cavallini was given a red card and ejected for violent conduct in the 53rd minute. Cavallini pushed Nashville’s Alex Muyl to the turf and then deliberately stepped on the back of his head as he jogged past.

Thomas Hasal made one save for the Whitecaps. The stop was on a penalty kick by Nashville’s Dax McCarty in the 90th minute.

Vancouver had a 12-10 edge in shots but didn’t put a single one on goal. Nashville put five on target.

Nashville scored in the 19th and 23rd minutes to start toward the victory.

The first goal occurred when Leal dribbled downfield and then took a long right-footed shot from outside the box. The ball hit the left goalpost and went into the net for his second goal of the season.

Four minutes later, Mukhtar took a corner kick for Nashville and sent it into the box. Maher was in good position and sent a header over the leap of Hasal and into the top of the net.

Nashville made it 3-0 in the 49th minute on a sequence that began with a free kick by Mukhtar. Zubak put his head on the ball and it went toward Maher, who headed the ball and watched it bounce into the net.

Vancouver had a chance to get on the board in the 75th minute, but Pedro Vite’s left-footed shot caromed off the left goalpost.

The Whitecaps’ Ryan Gauld had two opportunities when the game was tied early on but his left-footed shots were high in the 12th minute and wide left in the 15th minute.