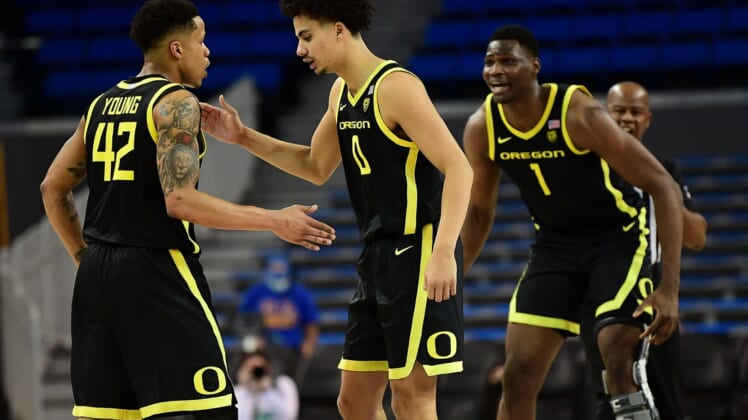 On the night Dana Altman chalked up his 700th career win, he chose to note something else.

“We haven’t fought through adversity throughout the year,” he said Thursday after Oregon upset No. 3 UCLA 84-81 in Los Angeles. “But we sure showed some growth tonight.”

Altman and the Ducks look to cap what would be quite a memorable week Saturday night as they stay in L.A. for another Pac-12 matchup with fifth-ranked Southern California.

Oregon (10-6, 3-2 Pac-12) started the week with a 78-76 victory at Oregon State in a makeup game, then handed the Bruins just their second loss in front of 119 friends and family members. That was all that was allowed in Pauley Pavilion because of COVID-19 concerns.

The Ducks, looking for their fifth straight win, will again play in mostly library silence at USC’s Galen Center with COVID-19 protocols also in place. Their play this week has spoken volumes as they’ve looked like the Top 25 team they were at the start of the year instead of the mediocre outfit they’ve resembled for most of the season’s first half.

Jacob Young scored 23 points to pace six Oregon players in double figures. Six of those came in overtime as the Ducks bounced back from a poor finish to regulation that saw them blow a six-point lead in the final 37 seconds.

Will Richardson leads three Oregon players in double figures at 13.6 points per game, converting 43.2 percent of his 3-point attempts. Young averages 11.3 and De’Vion Harmon chips in 10.1.

Meanwhile, USC (14-1, 4-1) bounced back from its first loss at the hands of Stanford Tuesday with a come-from-behind 81-71 victory Thursday night over Oregon State. The Trojans trailed 42-37 at halftime, fell behind by 10 early in the second half and took the lead for the first time with 10:33 remaining.

USC trailed by a point with 3:55 left after a Warith Alatishe layup, but scored the game’s final 11 points as Isaiah Mobley led the charge with two free throws and a pair of short jumpers.

Mobley finished with 11 points, seven rebounds, four assists and four blocked shots, while Chevez Goodwin scored a team-high 20 points and grabbed 12 rebounds. Drew Peterson tallied 17 points, reaching the 1,000-point mark for his career (which began at Rice) early in the second half.

“Everyone struggled the first 36 minutes, but we came up big when it mattered,” said Trojans coach Andy Enfield. “The guys decided on their own that they were going to win. We battled. We made shots down the stretch to win.”

USC has won six of the last eight matchups.