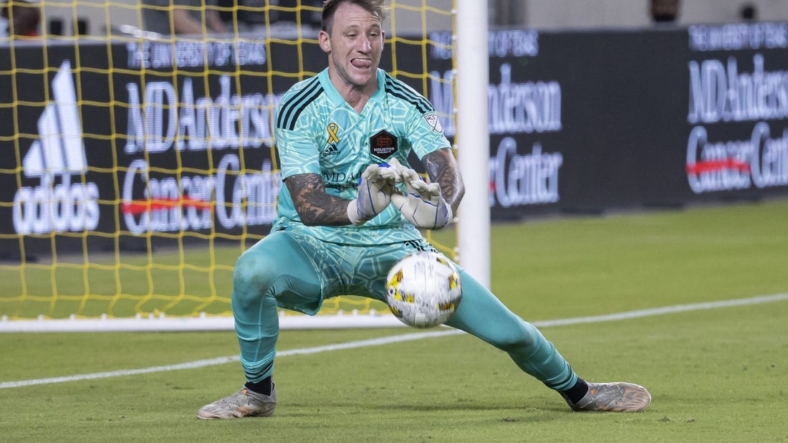 Steve Clark made six saves to help the Houston Dynamo play to a scoreless tie against visiting Sporting Kansas City on Saturday night.

Clark notched his sixth shutout of the season for the Dynamo, who played their first game under interim coach Kenny Bundy. The team fired Paulo Nagamura earlier this week.

Houston had a chance to win the game in the fourth minute of second-half stoppage time when Adalberto “Coco” Carasquilla made a field-long dash and dished the ball to his left to Thorleifur Ulfarsson, who sent a left-footed blast off the bottom of the crossbar.

The Dynamo (8-16-6, 30 points) are tied for last place in the Western Conference with the San Jose Earthquakes. Houston is 1-6-2 over its last nine matches.

John Pulskamp made three saves to post his second shutout of the season for Sporting Kansas City (8-15-7, 31 points). SKC is 3-1-2 over its past six games and is 12th in the West.

The result leaves Sporting KC with an 8-3-2 mark in their past 13 MLS matchups with the Dynamo.

The Dynamo played with just 10 men in the second half after Matias Vera received a red card late in the first half for getting his second yellow of the game.

Vera was first carded in the 18th minute for a hard foul. In the 41st minute, he made a hard sliding tackle into Sporting KC’s William Agada to draw the second yellow and receive the ejection.

Sporting KC held a 20-11 edge in shots and placed six on target to Houston’s three.

Sporting KC had a big chance in the 20th minute, but Felipe Hernandez’s right-footed blast caromed off the crossbar.

Houston’s Fafa Picault had an opportunity in the 60th minute, but Pulskamp made the save on his right-footed shot.