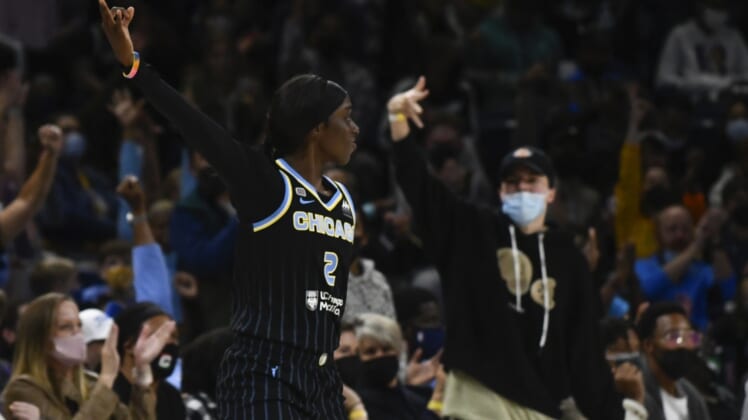 The Seattle Storm, troubled by a three-game losing streak, will try to get back on track Wednesday night when they play host to the surging Chicago Sky, the reigning WNBA champions.

Winning on Wednesday won’t be easy for the Storm (1-3). For the past two games, they have been missing two-time WNBA MVP Breanna Stewart and backup guard Epiphanny Prince due to COVID protocol. In addition, guard Mercedes Russell is out due to a non-basketball injury.

Meanwhile, the Sky (2-1) have won two straight games, albeit against teams with a combined 1-7 record. But reigning WNBA Finals MVP Kahleah Copper has finished her overseas season in Spain, rejoining the Sky.

Copper, who could make her season debut against Seattle on Wednesday or perhaps against Washington on Sunday, is coming off a breakthrough year. She became an All-Star for the first time in 2021.

Chicago has a loaded lineup that also includes six-time All-Star Candace Parker, three-time All-Stars Allie Quigley and Courtney Vandersloot, and Emma Meesseman — the WNBA Finals MVP in 2019 who joined the Sky this year after seven seasons with the Washington Mystics.

Quigley missed Chicago’s first two games due to an injured right knee. But she scored seven points in her return on Saturday against Minnesota.

Off the bench, the Sky feature Dana Evans — who leads the team with a 14.7 points per-game scoring average — and Rebekah Gardner, a 31-year-old rookie averaging 12 points.

Meanwhile, the Storm — who are off to their worst four-game start since 2016 — are hoping to get Stewart and Prince back on Wednesday.

In Seattle’s most recent game — a 69-64 loss to Phoenix on Saturday — the Storm got 26 points from three-time All-Star Jewell Loyd, 14 rebounds from Stephanie Talbot, and 10 rebounds, eight points and seven blocks from Ezi Magbegor.

“By no means is it time to hit the panic button,” Storm coach Noelle Quinn said. “We can grow from this.”