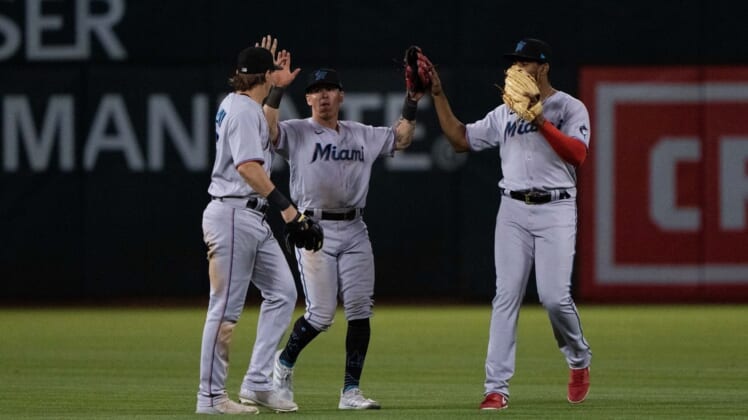 Two struggling offenses hope to take advantage of a pair of scuffling starting pitchers when the visiting Miami Marlins go for a second straight interleague win over the Oakland Athletics on Tuesday night.

The Marlins, coming off a three-game road series in which they were held to four runs by the Los Angeles Dodgers, almost matched that total in a 3-0 win over the A’s in the series opener on Monday.

Edward Cabrera (eight innings) and Tanner Scott combined on the shutout, the 13th time the A’s were blanked this season.

In pursuit of just their second winning streak since July 13-14, the Marlins will hope for more of the same from right-hander Pablo Lopez (7-8, 3.83 ERA), who has struggled of late.

The 26-year-old has started two of the Marlins’ nine shutout wins this season, going a season-best eight innings against the San Diego Padres on May 7.

Cabrera acknowledged after Monday’s effort, during which he retired the last 14 batters he faced, that he was pushing to go the distance. However, he lost a friendly verbal war with manager Don Mattingly as the Marlins batted in the ninth.

“I was fighting, trying to get that last inning,” Cabrera said. “That was the goal from the beginning: Finish like a strong man on the mound. They told me it was for my own sake, trying to protect me. But I still wanted to finish this game.”

One key for Cabrera was keeping Oakland’s Shea Langeliers out of the hit column. One day earlier, the catcher/designated hitter became an unlikely source of the club’s first triple since May 18 when he ended the club’s 81-game drought that was the longest in the majors since team records began being kept in 1901.

“I got lucky,” Langeliers said.

Added A’s manager Mark Kotsay, “It’s great to see the kid having fun. For a young catcher who’s stepping into this situation, he’s handled it pretty darn well. He’s got a great attitude. He’s got great passion for the game.”

Oakland got no extra-base hits and just three singles — one on a bunt — in Monday’s loss.

Like Cabrera, Lopez has never faced the A’s, who are going head-to-head with the Marlins for the first time since 2017.

Also for the second night in a row, Miami will face an unfamiliar starting pitcher, as Zach Logue (3-7, 6.35 ERA) will get the start on Tuesday. The lefty was bombed for seven runs in 4 1/3 innings in a road loss to the Texas Rangers on Thursday in his most recent outing.

The 26-year-old rookie has not faced a National League opponent in his 10 appearances (nine starts) this season.