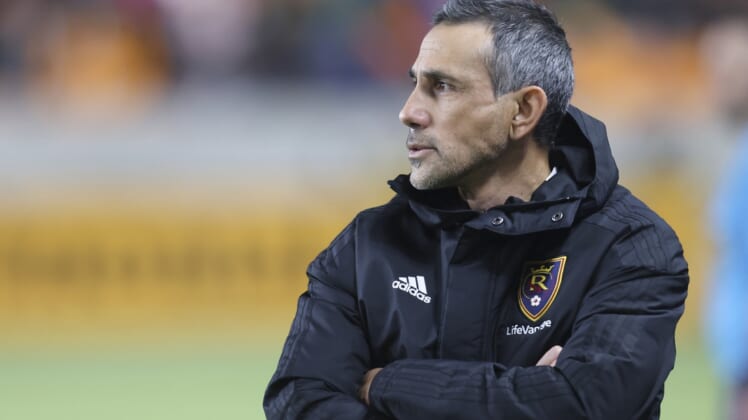 With three losses in four games, Sporting Kansas City are in an unusual position as they host Real Salt Lake on Saturday night: near the bottom of the Western Conference table.

Of course, it’s a long season and after losing three road games each by a two-goal margin, Sporting K.C. must be glad to be home to face the team that ended their 2021 season.

Kansas City (1-3-0, 3 points) has played only once at Children’s Mercy Park so far this season, a 1-0 victory over Houston that was less than impressive.

Yet coach Peter Vermes says his club just has to weather the storm as the team deals with a spate of injuries.

“The first priority is getting everybody healthy so you can have everybody in training,” Vermes said Friday. “Until that happens, we’ll just keep working on getting better every day.”

Real Salt Lake (3-0-1, 10 points) have started the season in much better form, much the way they ended last season when they surprised Seattle and SKC in the playoffs to reach the Western Conference finals.

They’re tied for the top spot in the conference with Los Angeles FC, having won three straight matches after opening the season with a scoreless tie in Houston. RSL’s latest win was a 2-1 decision over Nashville.

A win Saturday would push Real Salt Lake’s winning streak to four — their longest since 2013. Although coach Pablo Mastroeni’s team has had to deal with injuries as well, those injuries haven’t been as disabling to the club.

“It’s been fantastic to see,” Mastroeni said. “Sometimes as coaches you’re a bit apprehensive, but the belief we have in that locker room it gives me goosebumps. This game is about more than results. It’s about helping young men achieve their dreams.

“Our culture is player-led and coach-guided.”

Mastroeni hopes that continues Saturday, something that Vermes is expecting from a team that beat Sporting K.C. three times last season.

“Salt Lake is a good team,” Vermes said. “It’s always a battle for us against that team. We have so much to play for. We have to just keep competing. I’m sure it’s going to be a good game. Two teams are going to fight it out.”