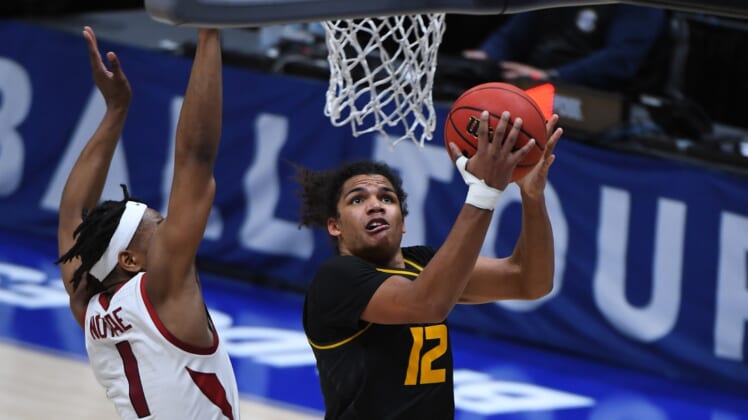 Oklahoma and Missouri soared, then faltered down the stretch. With a chance to first pause and regain their footing, the Sooners and Tigers meet Saturday in the NCAA Tournament in the West Regional at Indianapolis.

The game, seeding-wise, is one of the most evenly matched in the tournament with the Sooners earning the final No. 8 seed and Missouri the top No. 9 seed.

But the Sooners were dealt a blow when second-leading scorer De’Vion Harmon tested positive for COVID-19. The guard will miss Saturday’s contest.

“The team is disappointed for him,” Oklahoma coach Lon Kruger said Wednesday. “Others have been through it so they know how disappointing it is. De’Vion is handling it like you might expect — very disappointed to not be playing.”

Meanwhile, Both teams crashed after peaking with wins over Alabama within a week of each other.

The Sooners beat the Crimson Tide on Jan. 30 to become the first team since 1974 to win four regular-season games over top-10 opponents in the same month. Three of those wins came consecutively, with wins over Kansas and Texas preceding the win over Alabama.

Both teams moved into the top 10 following those respective victories, but since, both have struggled.

The Sooners are 4-6 since, with three of those wins coming over Iowa State, which didn’t win a conference game this season. Oklahoma has dropped five of its last six.

“Everything that we worked for moving forward is still in reach,” Oklahoma point guard Austin Reaves said. “We can still do those things we were talking about at the first of the season. Even when we went on this little losing streak, we still believed we could do those things. It’s really just staying together, being prepared, playing as hard as we possibly can every possession to make those dreams and aspirations come true. I feel like that’s what we’re going to do.”

Missouri is 3-6 since knocking off Alabama.

“It’s a whole new season,” Tigers guard Dru Smith said. “Nothing really before this matters at this point. You’ve just got to come in with a whole new energy and understand that anything can happen from here.”

The matchup between Smith and Reaves figures to be one of the keys to the game.

Reaves is the Sooners leader in scoring, assists and rebounds. During the last six games, Reaves’ has averaged 20.3 points after averaging 16.8 points per game before that, but his shooting percentage has dipped slightly while his turnovers have risen from 2.8 to 3.3 per game and assists have gone down from 5.2 to 3.3 per game.

Reaves and Smith have squared off before, both last season when Reaves scored 19 in Oklahoma’s 77-66 win over the Tigers in Kansas City early in the season, and early in their careers when Reaves played at Wichita State and Smith at Evansville.

Smith has been the Tigers’ best defender.

Most of the major contributors in last season’s game from both sides return, including every player who scored in that game for the Tigers.