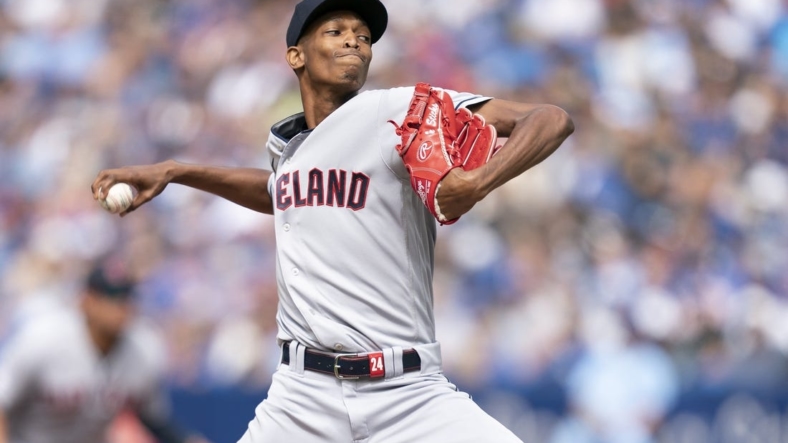 Entering play last Monday, the Cleveland Guardians led the Minnesota Twins by two games and the Chicago White Sox by five in the race for the American League Central division crown.

Fast forward a week, the Guardians now share the division lead with the Twins, with the White Sox just two games back.

The Guardians have lost five straight games and eight of their past 10 as they enter a three-game series in Kansas City against the Royals. The Guardians will send Triston McKenzie (9-11, 3.18 ERA) to the mound.

The Royals will counter with Brady Singer (7-4, 3.33 ERA) in a battle of right-handers. Singer allowed four runs on nine hits and a walk in 4 2/3 innings against the White Sox last Tuesday.

The Guardians were swept by the Seattle Mariners after losing Sunday’s game 6-3 in 11 innings.

The Royals defeated the Detroit Tigers 3-2 to claim a three-game series. Bobby Witt Jr. had an RBI double in the eighth inning and also made a spectacular bare-handed play at third base.

“We make a big deal about (Salvador Perez) when he gets in those situations,” manager Mike Matheny said of Witt’s game-winning hit. “It’s almost like he thrives on it. Bobby is starting to take that ownership onto himself too.”

McKenzie is just 2-5 in his past seven starts, but he hasn’t been beaten up. He has not allowed more than four earned runs in any of those starts, and he’s gone at least six innings in six of the seven. He has a combined ERA of 3.35 (17 earned runs in 45 2/3 innings) in those seven starts. The problem has been the Guardians’ offense. They have scored a total of 13 runs in those seven games.

In his most recent start, McKenzie gave up two runs on five hits over five innings in a 4-0 loss to the Baltimore Orioles.

“It was kind of an odd line,” manager Terry Francona said of McKenzie’s outing. “He had some strikeouts and a couple of walks. It seemed like after the home run (by Gunnar Henderson) he kind of stepped on it a little bit.

“There were some long at bats. That never helps a pitcher. He was at 97 (pitches) after five. That tells you something didn’t go the way he wanted it to.”

Then Francona touched on the lack of offense.

“For the lack of hits, we had some traffic. But it was all with two outs and we couldn’t get a big hit.”

McKenzie is 4-2 with a 2.74 ERA in his nine career appearances (seven starts) against the Royals, including a 1-1 mark with a 2.00 ERA in two appearances (one start) this season.

Singer, the No. 18 overall selection in the 2018 draft, made his MLB debut in July 2020 in Cleveland. He’s 2-0 with a 4.21 ERA in seven career appearances (six starts) against the franchise. He doesn’t have a decision in two appearances (one start) this season against the Guardians.