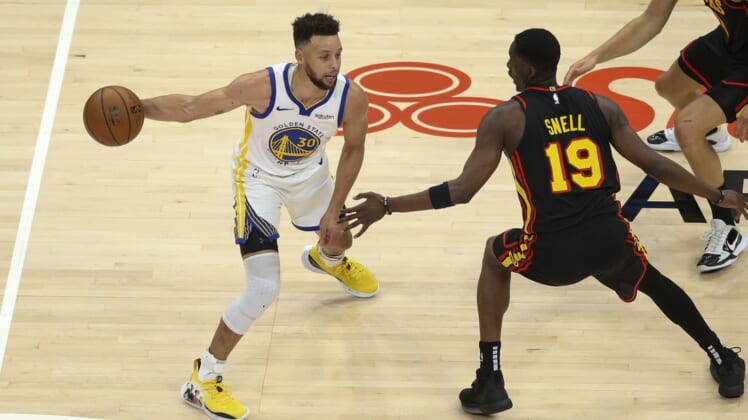 Mired in a post All-Star Game funk, the Golden State Warriors will continue to search for answers Tuesday when they face the visiting Milwaukee Bucks.

The Warriors have lost seven of their past eight games and are 4-9 since the NBA hit pause for its condensed All-Star event at Atlanta in early March.

The Warriors were as high as seventh in the Western Conference standings as recently as Feb. 27, but they are now 10th and in danger of missing out on the playoff play-in tournament for teams in the seven through 10 positions.

The Warriors completed a winless three-game road trip Sunday with a 117-111 defeat at Atlanta when Stephen Curry returned from a tailbone injury to score 37 points. If it was any consolation, the defeat was far better than the 130-77 loss endured Friday against the Toronto Raptors.

“Frustrating for a lot of reasons but we have another game Tuesday against a great team, and we’ve got to be able to show up and compete,” Curry said. “… There is still a good amount of time (remaining) but you cannot play the way we have played over this last significant stretch and expect things to change.”

A consistent presence from Curry should help. He has missed six of the past nine Golden State games with his tailbone issue, and the injury is being guarded by protective padding. But the Warriors will now be without Eric Paschall for at least the next two weeks because of a hip flexor strain.

“We have to make the necessary adjustments,” Curry said. “It sucks right now. Losing sucks. It’s a terrible feeling and in the locker room we don’t have much to smile about.”

The Bucks recently were on their own slide, having lost three consecutive games, with the third defeat in that stretch coming March 29 at the start of the current six-game road swing. But they have reversed course with three consecutive victories, including a 129-128 escape at Sacramento on Saturday.

The Bucks won without Giannis Antetokounmpo, who had 47 points in a victory at Portland on Friday and then sat out Saturday with knee soreness. Jrue Holiday stepped up with a season-best 33 points, six of which came in the final 2 1/2 minutes.

Holiday followed that Sunday by agreeing to a four-year, $135 million contract extension.

“I’m a Buck for life,” Holiday said after the deal was announced. “Just know that I’m glad to be a part of Bucks Nation. Let’s do some big things, man. I’m really excited.”

His first chance to show his appreciation comes Tuesday, and the Bucks gladly will take more of the same. Holiday has averaged 26.8 points with 8.5 assists and 5.8 rebounds in the four games of the road trip.

Middleton was held to 16 in the victory over the Kings, but Brook Lopez stepped up with 26 and Bobby Portis had 18 off the bench to compensate for the team being without its top player.

“That’s what’s special about our team,” said Donte DiVincenzo, who had 12 points and 14 rebounds from the shooting guard spot. “Giannis doesn’t play and somebody steps up.”