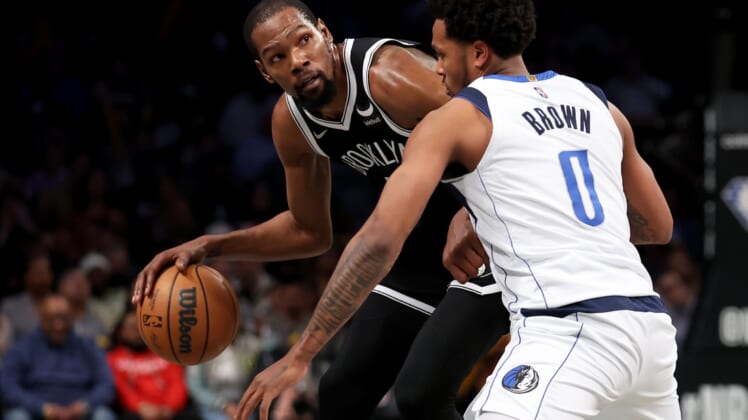 While the Brooklyn Nets keep waiting to see if an unvaccinated Kyrie Irving can appear in home games, an inability to consistently win at Barclays Center is among the reasons they are in a play-in, and not a playoff, spot.

Brooklyn’s 14-19 record is the worst home mark of any teams in the top-eight of their respective conference, and the Nets hope to avoid another home defeat Friday night when they host the Portland Trail Blazers.

Brooklyn is 3 1/2 games behind the seventh-place Toronto Raptors, leads the ninth-place Charlotte Hornets by one game, and the 10th-place Atlanta Hawks by 1 1/2 games entering Thursday’s action. The Nets also play eight of their final 12 games at home, and those are games Irving cannot appear in due to New York City mandates regarding vaccinations.

Durant logged 40 minutes, marking the sixth time in his past 13 games he played at least 40. The night after Irving’s 60-point game in Orlando, the Nets were also without LaMarcus Aldridge (right hip impingement) and Seth Curry (left ankle soreness) and wound up getting outscored 34-20 in the fourth quarter.

While Aldridge is likely out for another week, Curry is expected to return Friday.

Portland heads to Brooklyn with eight losses in nine games. Despite the skid, the Trail Blazers sit 1 1/2 games behind the New Orleans Pelicans for the final play-in spot in the Western Conference entering play Thursday.

During the skid, the Blazers have endured seven double-digit losses and their average margin of defeat is 29.1 points. On Wednesday, Portland endured its sixth 30-point loss since Feb. 24 when it trailed for the final 41:37 in a 128-98 loss to the New York Knicks.

Portland allowed the Knicks to shoot 50 percent and also committed a season-high 31 fouls while also allowing an opponent to make at least half its shots for the 27th time.

“Some mental mistakes, some miscues on defense, not being as connected as we would like kind of led to them opening up that lead there in the third quarter,” Portland’s Justise Winslow said.

Portland claimed the first meeting 114-108 on Jan. 10 and its starting five in that game was Nassir Little, Simons, Robert Covington, Jusuf Nurkic and Ben McLemore. Of those players, only McLemore likely will appear Friday due to injuries and trades.